EDITOR'S NOTE: Daily RFT incorrectly identified the party filing for bankruptcy in our original blog post, published in April 2008. The matter was brought to our attention by an attorney representing James Neumann in August 2010 and this post was subsequently corrected.

On March 13, a St. Louis County jury told James Neumann, CEO of Chesterfield-based outdoor advertising firm AdOne Media Inc., that he and his company had to pay $1.1 million in damages to a former employee. Earlier this month he his company filed for Chapter 7 bankruptcy. 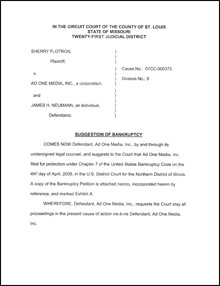 The damages were the result of a sexual harassment lawsuit filed by Sherry Flotron, an employee who worked for the company for four months starting in January 2007.

Flotron claimed Neumann constantly dogged her when she worked for the company and that he sexually assaulted her while the pair was on a business trip to Las Vegas. Neumann denied the allegations, pointing out that Flotron continued to buy stock in the company, and even convinced her father and grandmother to invest, until just before she was fired.

During the trial, Neumann told the jury that his personal assets were about $2 million and his company was worth about $12 million.

Neumann's attorney, Albert Watkins, explains that the company will pay its debts to many of its creditors but that Flotron is unlikely to be one.

"It is doubtful whether there will be anything left for the unsecured creditors like Flotron. If there is, it will in all likelihood be pennies or less on the dollar," Watkins writes via e-mail. "It looks like this lotto ticket may not be worth the paper on which it is written."

Watkins adds that Neumann is still pursuing a new trial for the harassment suit and, if necessary, an appeal.

The company's Web site has been taken down, but here's a profile from the investment news service Qwoter, which says the advertising firm helps "small to large-sized businesses tap into the potentially huge benefits of billboards, posters, taxi tops & windows, buses, mobile advertising."