A spokesman for McEagle Properties says the company will soon announce that it will work with community organizations on the hundreds of parcels that its founder, Paul J. McKee Jr., has acquired in north St. Louis.

As Riverfront Times has reported, McKee is now one of the single-largest landowners north of downtown, and his new neighbors often complain about the lack of maintenance on his properties, which include vacant lots, vacant buildings and recently vacated buildings. 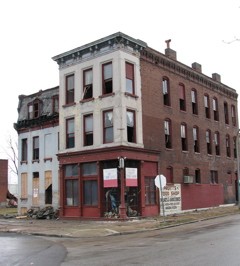 Brick thieves, then the wrecking ball: The old corner grocery at 2858 St. Louis Avenue is no longer.
“We're looking at a number of options for the maintenance of areas,” says Dan Brungard, spokesman for O'Fallon-based McEagle. He adds that “relatively soon” McEagle would make an announcement regarding its work with “community organizations.”

When it comes to McKee's work on the north side, this qualifies as a veritable fount of open communication.

In October Metropolitan Congregations United had McKee tentatively scheduled to appear at a meeting at Holy Trinity Catholic Church in Hyde Park. MCU is a coalition of community-activist churches that wanted McKee to join a north side “stakeholders” group. MCU's leaders had promised not to put McKee on the spot about what he plans to do with his expanding real estate portfolio.

McKee didn't show. (Brungard said later that there had been a scheduling conflict.) At that meeting, the Rev. Richard Creason, pastor of Holy Trinity, asked MCU members to send McKee 2,000 postcards, urging him to participate in the stakeholders group. Since then MCU has been mum on the stakeholders group and the postcard campaign.

Meanwhile McKee's neighbors watched at least two of his properties fall victim to brick thieves. One was an old corner grocery with flats on the upper stories at 2858 St. Louis Avenue, the corner of Glasgow. The other was on the north side of the street at 2845 St. Louis Avenue, a two-family flat topped with a turret. Both were demolished under an emergency permit.

“These buildings were actually brick-rustled first, so he's not really protecting his property,” says Doug Duckworth, a blogger and preservationist who tends to favor a storm-the-gates style of activism.

Duckworth's encounter raises a good question about who at McEagle is handling the various questions and complaints that arise about the north-side properties, which according to the Post-Dispatch number about 500. Brungard says Mitchell is not the usual point person for the north side and McEagle is looking to hire a project manager. In the meantime, Brungard says anyone who has a question or complaint should call him at 636-561-9300.

McKee's people are also keeping tabs on a massive tax credit that would help pay for the land he acquired. The “Distressed Areas Land Assemblage Tax Credit Act,” which the legislature passed in a special session last summer, grants up to $10 million a year for projects approved from January 1, 2008 until August 28, 2013. To be eligible an applicant must have at least 50 acres of non-contiguous property.

Before McKee can apply to use the tax credit in St. Louis, he has to strike a “redevelopment agreement” with a “municipal authority,” according to the act. The act further states that selection of a “redeveloper” shall have been approved by an ordinance of the municipality's governing body. In the case of a city not within a county -- that'd be St. Louis, and St. Louis only -- the redeveloper must be approved by the board of aldermen.

McKee, now through Brungard, continues to hold out the possibility that he might not do anything on the north side. At the same time, his lawyer has inspected a draft of the tax credit's application form and guidelines.

“We look at everything that's on the table,” Brungard says, adding, “I don't think there've been any decisions made on A) whether there's even a project.”

Department of Economic Development spokesman Keener Tippin said he doesn't know when the door will open for applications. In the meantime DED officials are digesting comments submitted by a lawyer at Stone, Leyton and Gershman, and by Michael Allen, the blogger who discovered that McKee was behind the north-side acquisitions. Allen submitted his comments as assistant director of the architectural-preservation group Landmarks Association of St. Louis.