Unreal Goes to Purim Town -- And We Purim Down!

Thursday evening was the Jewish festival of Purim (pronounced "pour 'em" for reasons that shall be explained). Purim is a very special holiday. Ostensibly, it is a lot like most other Jewish holidays: They tried to kill us, we survived, let's eat. In this case, the would-be killer is the evil Haman, chief advisor to the Persian king Ahasuerus; the saviors are Esther, Ahasuerus' lovely and secretly Jewish queen, and her cousin Mordecai; and the ostensible food is hamentaschen, triangular cookies meant to represent the evil Haman's hat. But really Purim is about drinking. Lots and lots of drinking, ideally while wearing silly costumes. 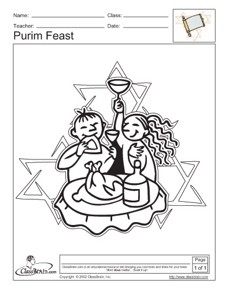 How could Unreal resist such a celebration? We decided, in fact, to take in the full range of the St. Louis Purim experience: first with the folks at the very liberal Central Reform Synagogue in the Central West End, and then with the Lubavitch Hasidim at Washington University Chabad, whose capacity for drunken revelry, we knew from past experience, is unmatched among Jews.

We arrive late at CRC to discover Rabbi Susan Talve patiently hearing the plea of Fruma Sarah (movingly portrayed by Rabbi Randy Fleisher, clad in skirt and schmatte), a poor Jewish girl who desires nothing more than to become a religious leader, just like the two womenpriests whose ordination the synagogue hosted last fall. A congregant dressed as Archbishop Burke jumps up to protest, but the rest of the crowd shakes its noisemakers and shouts him down. Archbishop Burke has as much standing here as the evil Haman.

In order to prove her rabbinical credentials, Fruma Sarah agrees to help Rabbi Susan with the reading of the megillah, or Purim story. As we did in childhood, we boo Haman and cheer Esther and Mordecai with almost equal enthusiasm. But now the story seems slightly…different from what we remember. We'd always been told King Ahasuerus selected the lovely Esther from a "beauty contest" to be his queen. Now we learn "beauty contest" was code for harem. And there are eunuchs. Suddenly the Purim story takes on new dimensions and begins to resemble this romance novel we read last year. Ah, but we digress....

Further surprises await us during the Chapter 7 Stretch: the megillah contains a prayer for the Cardinals! Who knew? And in the fearsome Chapter 9, the Jews, not content with the hanging of the evil Haman, proceed to slaughter 500 of his relatives. Brutal, yes, but it's sort of refreshing that the Jews aren't totally the victims this time.

Over mediocre hamentaschen, we kibbitz with the Megillah Gorilla, Elvis and the Greek god Bacchus himself. There is no alcohol, only coffee, but we are confident the Lubavitchers will provide. Accordingly, we drop by Dressels and devour some fried potatoes, a Celtic variation on the great Lubavitch hangover preventative: pickled herring.

The Wash. U. Chabad house is quiet as we stroll up the front walk. Where is the Purim spirit? Inside, pockets of girls stand in clusters chatting. The hamentaschen plates are untouched. There is no one at the bar. Where's the megillah?

Near the back of the house, we see a rabbi hurry across the hall. He wears a Rasta hat with fake dreads, which mimic the tzit-tzit, or prayer fringes, that dangle from his hips. He opens a door, and we move to follow him. And then we see it: a room in readiness...for beer pong. We see the rabbi pick up a paddle.

The time has come to start celebrate Purim in its purest form.