Here's some interesting follow-ups to my March 5 feature story examining the use of red-light cameras in St. Louis. 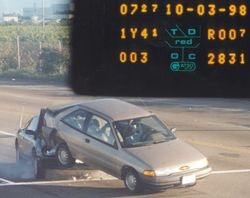 MSNBC reports today that officials in Dallas are removing more than a dozen cameras from intersections because they don't generate enough money to merit their cost. The news network reports that other cities -- including Charlotte and Fayetteville, North Carolina -- have also shut down cameras because the devices failed to raise enough revenue.

But red-light cameras aren't about making money. They're about public safety, right?

Tell that to officials in Lubbock, Texas, who last month shut down all cameras in their city after learning that the cameras actually increase the amount of rear-end collisions at intersections (a factoid my article pointed out.)

In St. Louis, meanwhile, the Board of Aldermen is expected to soon pass Board Bill 511 that would allow the city to jail and fine people who do not promptly pay citations generated from cameras installed at 21 intersections. As I reported earlier this month, city officials are effectively powerless -- as it stands -- to collect the $100 fines generated by the cameras and won't issue a bench warrant against people who simply ignore the citation or fail to appear in court.