Dana Loesch's online "Mamalogues" column ran for the last time on STLtoday.com back on March 3. The RFT's "Best Newspaper Columnist" last year, Loesch was told the paper was discontinuing her byline in favor of longtime staffer Aisha Sultan's "Dirty Laundry" column in the print edition, as well as a parenting blog online.

Of course, this is old news to some in the blogosphere. I'm late to the party because I was waiting for a comment from Loesch's editor.

"As her fans know, Dana Loesch has a distinctive voice and a delightfully eclectic website. We wish her the best.

"We are in the process of revamping and expanding our offerings online and in print, scouting fresh talent and adding a lot of terrific new content that we hope will interest a wide audience." 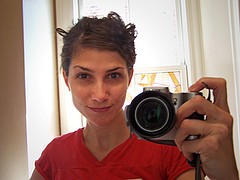 Mamalogues mama Dana Loesch (first thing in the morning)
I was hoping for more, but there you have it. Not clear whether the paper's issues with her were budgetary or substantive. I also tried Kurt Greenbaum, who hired Loesch when he was online news director, but he declined to comment.

Loesch has been blogging about mamahood with sass and style here since 2004. She created her column for the Post's print edition in the summer of '06. But just six months later, her byline was consigned to cyberspace after some readers complained about her candor.

She was disappointed at being sidelined for employing words like "breast" when talking about subjects like...breast-feeding.

And she was vocal about it (see December 14 entry).

Our editor (and a bunch of readers) also chimed in.

This month Loesch was also vocal about being fired.

Loesch tells me she and Bertelson have never met, or, for that matter, had a telephone conversation.

"Social media is not even six years old," says Loesch, offering her take on the ouster, "and it's very different from the old-school prim-and-proper tea-and-crumpet type of journalism. I think my column was a kind of culture shock to her or something, and we just missed each other. I felt like we were butting heads stylistically."

Adds Loesch in a subsequent e-mail exchange: "I hope it [doesn't] come off as a 'she wants revenge' sort of thing. I understand that as a company, they have a right to do whatever they want whenever they want and however they want."

Here is one column Loesch says she and Bertelson wrangled over. And here's another.

Loesch says the Post asked her to keep writing her "Pop Mama" pop-culture blog but that she said no-thanks. She says she was also asked to continue helping (gratis) put together a mothers' community on the newspaper's Web site, but declined.

Instead Loesch and a group of fellow bloggers are creating an independent online network that they expect will bring in a bunch of advertisers. "It'll be a way to profit from our work ourselves, instead of having to rely on a mainstream publication," she says.