OK, so the Cardinals finally broke down and signed free agent pitcher Kyle Lohse to a one-year deal, according to the Associated Press. 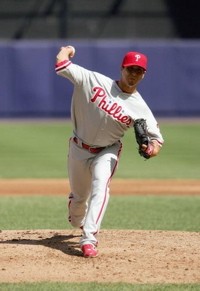 Why's Lohse get no respect?
But to judge from his comments, rookie general manager John Mozeliak did the deal while holding his nose.

"If it were a perfect world, we wouldn't have had to go down this path," AP sportswriter R.B. Fallstrom quotes Mozeliak as saying. "But it's not and we're going to need someone to pitch every fifth day.

"At some point, we may be dealing with a strength instead of a weakness."

The Cards got Lohse for $4.25 million plus incentives that could nudge the price tag close to $5 million.

As Viva El Birdos blogger Larry Borowsky has pointed out more than once, the 29-year-old Lohse's numbers are remarkably similar to those of former Cardinal hurler Jeff Suppan when Suppan came to the Cardinals.

The tale of the tape:

What's not to like -- with the possible exception of Lohse's dubious choice of agents (Scott Boras)?

Here's a link to Borowsky's most recent Lohse post, and to a previous one on the ex-Twins/Reds/Phillies pitcher. And here you can find Lohse's career numbers.