It's not looking good for Mark Pollman -- he of the puffy shirts, salty tongue and the first -- and only -- St. Louisan inducted into the Bartender's Hall of Fame. 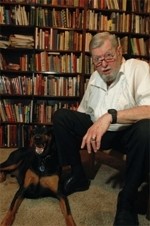 Mark Pollman and his Doberman, Harry.
As I reported last week, the erstwhile Fox & Hounds barkeep was admitted March 2 to Barnes-Jewish Hospital's intensive-care unit. His condition, according to family and friends, remains critical. Pollman, 64, was diagnosed over a year ago with prostate cancer and received treatment with radioactive seeds designed to fight the disease. Perhaps as a result of that treatment, Pollman recently developed a fissure between his colon and bladder that has allowed intestinal and bladder matter to leak into his lower body cavity and poison his system.

Today (Monday) doctors were to wean Pollman off his ventilator in order to see if his body could withstand major surgery. According to a source close to the family, the BJC medical staff was not confident the legendary bartender would rally. "In short, and to get to the point, only a miracle will save our dear friend now," says the source.

In the meantime, friends and acquaintances have been sharing their memories and well wishes via an online message board created in Pollman's honor. You can read -- and contribute -- to the growing number of comments here.