Basketball by the Book: Floyd Irons Paid for Players to Live Near Vashon High School

Floyd Irons personally spent between $25,000 and $30,000 to house, feed and clothe two Vashon High School basketball players during a five-year period, according to the transcript of his November 12, 2007, interview with officials from the Missouri State High School Activities Association (MSHSAA). 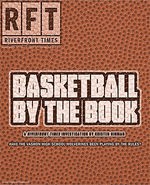 For a link to Kristen Hinman's award-winning "Basketball by the Book" series, click the image above.
The players' names are redacted from the transcript. But documents previously obtained by Riverfront Times indicate that the two players were brothers, Johnny and Bobby Hill. Prior to enrolling at Vashon in 2002, the Hills attended public schools in Alton, Illinois.

Irons told MSHSAA that he met Johnny (Vashon '05) and Bobby ('06) through his then-confidant, Vashon booster Mike Noll. Noll knew of the boys through AAU basketball programs.

Irons went to visit the Hills at their home in the spring of 2002. The boys lived in a basement, Irons said, suggesting it was not a great environment. "[…I]t touched me," he told MSHSAA.

Irons said he and the Hills' father agreed that the boys would move into the Vashon attendance area and play for the Wolverines if Irons could help find the father a job and a place to live.

With Noll's help, Irons said, a job became available for the father at Bartolino's Restaurant in south St. Louis. Irons said he found an apartment for the Hills in a housing complex just a few blocks from Vashon. Because of redactions in the transcript, it is unclear whose name was on the lease.

Irons said the boys' father reneged on the agreement and did not move to the apartment or take the job at Bartolino's.

Irons said he and the Hills' father "went round and round about why he wasn't living up to the portion that he said he was gonna live up to," according to the transcript. "I, you know, didn't feel as though [redacted] should have been penalized totally by that. I got in to the picture, it was my responsibility now."

Irons paid the $460-per-month rent for the apartment, where the brothers, then in ninth and tenth grade, lived alone, according to the transcript. The utilities were registered in the name of one of Mike Noll's friends, Irons said, so that there would be "no connection" to Irons.

Irons also said he paid for the boys' food and clothes, and made sure they had beds and a television set. He also gave them a car, a blue 1985 Cadillac DeVille.

Teachers and others who were close to the basketball program sometimes contributed food and spending money for the boys, Irons told MSHSAA officials. He said he and others would stop by the apartment every so often to check on the boys.

Irons also said that he found a woman who would clean the place and make Sunday dinner for the Hill brothers for the year-plus that they lived there.

Irons said his assistant coaches were aware of the boys' living arrangement, and that former principal Dorothy Ludgood, who died in 2003, knew Irons was helping the Hills with amenities.

Irons said he knew the boys' transfers and living arrangement violated MSHSAA rules. "[I]f I had to do the situation over again the way it was done I would do it again…," he said.

Irons also said he tried to get the boys' father to relinquish guardianship to him but that the father would not agree to it.

Johnny Hill now attends Southeast Missouri State University, where a voicemail was left requesting comment. Bobby Hill attended Illinois State University his freshman year, then transferred to Lincoln College in Normal, Illinois. He is not listed in the school directory. Their father could not be located for comment.

Irons and Noll were later involved in a real estate scam that netted them tens of thousands of dollars. Both pled guilty to federal charges last fall.

Irons was the subject of a Riverfront Times investigation, "Basketball by the Book," in 2006-'07. [Editor's note: The series was recognized with top honors by the National Association of Black Journalists (NABJ) and the Education Writers Association (EWA).]

Check back here for more on Vashon as the MSHSAA investigation continues.

Early next week we'll scan and upload portions of the interview transcript.