Basketball by the Book: Documentary Evidence

I went off on the St. Louis Post-Dispatch the other day for not giving credit where credit was due regarding Kristen Hinman's investigative series "Basketball by the Book," which painstakingly provided documentary evidence of residency violations on the part of Vashon High School and its boys' basketball program under longtime coach Floyd Irons.

As I noted, a Post story earlier this week, headlined "Inquiry into player eligibility leaves Vashon's titles at stake," outlined how the Missouri State High School Activities Association (known as MSHSAA) has opened an investigation into the eligibility of more than a dozen Vashon students who played under Irons since 1998. Vashon won five state championships since then, in 2000, 2001, 2002, 2004 and 2006.

MSHSAA officials, reporter P-D David Hunn informed us, are looking into "whether players lived within Vashon attendance boundaries, were registered at the correct addresses or were improperly recruited."

I expressed my, uh, peevishness because the Post somehow neglected to mention that the MSHSAA investigation was undertaken only because Hinman had exposed Vashon's violations in "Basketball by the Book."

Instead, St. Louis' Only Daily attributed its knowledge of the probe to "documents obtained by the Post-Dispatch."

Well, among those "documents obtained by the Post-Dispatch" is this "document," a letter from MSHSAA executive director Kerwin Urhahn that makes clear precisely what prodded the agency to action: 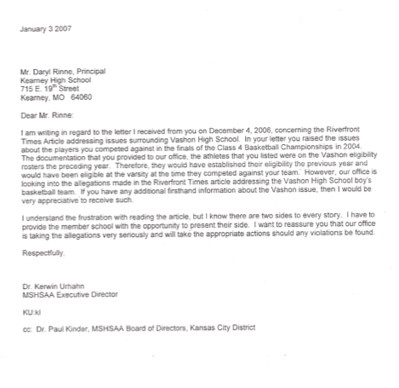 To download in pdf format, right-click on the letter above.

Hunn went so far as to contact the author of that letter, Daryl Rinne, the principal of Kearney High in the Kansas City area, which lost to Vashon in the 2004 state championship game.

A graphical representation of Hinman's investigative labors is available for download right here:

To download in pdf format, right-click on the chart above.