Some Missouri Campaign Contribution Numbers to Crunch on Super Tuesday

If you hew to the axioms that voters tend to punch their ballots where they place their money and that Missouri is the bellwether of the nation, then the next president of the United States will be…Mitt Romney. As of December 30, by the calculations of the Federal Election Commission, Romney had collected $842,240 from Missourians.

If it's Super Tuesday, this must be Missouri, or California, or New York, or New Jersey...
Of course, these numbers can be misleading. (Can’t they always?) If you notice that a lot of the money in Missouri seems to come from the St. Louis area, you’ll no doubt also notice that Romney is not the leading campaign contribution-earner here. He garnered a mere $481,990 from St. Louisans and was out-collected by Barack Obama, who tallied $530,404.

Romney, like the other candidates, both Republican and Democratic, found most of his funding in affluent west St. Louis County. More than those of any other candidate, Romney’s supporters were more likely to give the maximum contribution of $2,300.

But each vote has (or should have) the same weight, whether the person who casts it has given his or her candidate $2300 or $1. In Clayton, Romney and Obama collected nearly equal amounts, $101,050 and $97,894 respectively. But Romney’s money came from 85 donors, while Obama had 150. And again in Webster Groves, Obama and Romney received the same amount of money, but Obama got his from four times as many supporters. This trend is general all over the St. Louis area.

(More after the jump.)

Also, Romney’s cash has not protected him from several sound thrashings all over the nation at the hands John McCain, who boasts a much smaller campaign war chest. Here in St. Louis, McCain has received 25 percent as much money as Romney. But like Obama, he has supporters who are more numerous than they are generous. (One Claytonite saw fit to give him a single dollar.) 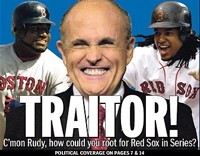 Rudy, we hardly knew ye -- but we sure gave you a lot of money!
Romney has, however, raised nearly half of the Republicans’ $2 million in the state of Missouri. The Democrats had better start cracking if they want a chance in November; at the moment, they are at $1.85 million, though it is more evenly distributed among the major candidates.

• City residents are more likely to give their money to Democrats, while those in the suburbs go for Republicans. In the case of Mike Huckabee, Missourians outside St. Louis out-donated St. Louisans ten to one.

• John Edwards, while he was in the race, enjoyed a great deal of support in north St. Louis County, or at least from one family, which gave him nearly 10 percent of all his contributions for St. Louis in general.

• Ron Paul has a couple of pockets of loyal supporters in Maryland Heights and south St. Louis County. Those too appear to be related to one another.

• The FEC has somehow seen fit to attribute several donations to Mike Gravel from the 63040 zip code to “Wildwood, MT”. Can’t the man get any love? (He received an additional $40 from a student at Truman State in Kirksville, also misidentified as part of Montana.)

Here’s the complete list of campaign contributions as of 12/30 ($ amounts in parentheses are 631XX only):

*has withdrawn from race