After all the controversy surrounding alcohol sales and sponsorships at last year’s St. Louis Mardi Gras, the run-up to this week’s festival had been relatively calm -- until this past Saturday, January 25. 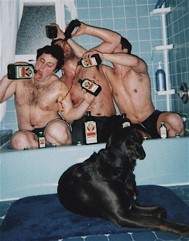 Mardi Gras Inc. to Jägermeister: Put up or pack up.
That’s when the Missouri Division of Alcohol and Tobacco Control says liquor manufacturer Jägermeister set up a stage on the corner of Ninth and Soulard streets, across from Llywelyn’s Pub. In addition to a music stage, Jägermeister had planned to inflate a giant balloon advertising the company’s signature green bottle.

“Under no circumstances would that be permissible on the licensed premise,” says Mike Schler, deputy supervisor of the state’s division of alcohol control. “It may have been approved had [Jägermeister] gone through the proper channels. But this was a last-minute thing. It should have been cleared eight months ago.”

Last year the state alcohol commission drew up a list of terms regulating alcohol sales and advertising at Mardi Gras following complaints from Soulard bar owners that the festival’s organizers -- Mardi Gras Inc. and the Mardi Gras Foundation -- had imposed overly harsh fines for business owners that violated Mardi Gras sponsorship agreements. Bar owners advertising brands other than official sponsors Bud Light and Southern Comfort could see their fees to participate in Mardi Gras increase tenfold, to as much as $10,000.

Under the rules agreed to last year, bar owners can now advertise any brand of liquor without fear of retribution from Mardi Gras Inc. Alcohol sponsors, meanwhile, are prohibited from providing individual bars with more than $500 in advertisement and promotional material for the event -- although official sponsors Bud Light and Southern Comfort can provide blanket sponsorships to Mardi Gras Inc. exceeding that amount.

Schler says the Jägermeister stage and blow-up bottle exceed the $500 limit and are more on par with promotional material Bud Light and Southern Comfort provide the festival. “Mardi Gras Inc. wanted Jägermeister to pay a sponsorship fee of $10,000, and Jägermeister didn’t want to put up the money,” says Schler. “The last message I received from Jägermeister’s attorney is that everything is worked out. I don’t know if that means they’ve agreed to sponsor Mardi Gras or if they’re pulling out.”