Welcome to the Fukudome

Unreal read this past weekend that Chicago Cubs owner Sam Zell may soon sell the naming rights for Wrigley Field is causing quite the stir in the Windy City. We’ve heard suggestions that the city’s other media titan, Oprah Winfrey, should buy the ballpark and rename it a close approximation of its current moniker: Winfrey Field. 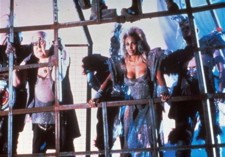 There's no crying in Fuckudome, bitch!
But then, why should Wrigley Field’s new name be limited to corporate interests?

We suggest that the Cubs need only to look within themselves -- and specifically at their new outfielder from Japan -- for the perfect ID. Okay, so Kosuke Fukudome pronounces his name Foo-ka-doe-may. But in print his name conjures images of something straight out of a Mad Max film. And for visiting ballclubs, what could be more intimidating than playing in the Fuckudome?