Devon Alexander Finds the Spotlight -- and Makes the Most of It

A few years back, Ben Westhoff profiled local boxing trainer Kevin Cunningham, corner man to the pride of St. Louis', Cory Spinks. But the ultimate focus of the story, written in the wake of Spinks' deflating defeat at the hands of Zab Judah, was an up-and-coming welterweight named Devon Alexander.

Alexander, a seventeen-year-old senior at Vashon High School at the time, had fought on the on the February 5, 2005, Spinks-Judah undercard and won a unanimous decision against Mexican Donovan Castaneda, to raise his pro record to 3-0. 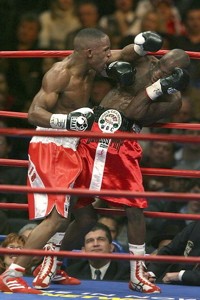 "It felt great to go 12 rounds with a former world champion," Alexander is quoted as saying in a story by Dan Rafael at ESPN.com. "It was hard because it was my first 12-rounder. I was pressing hard early trying to get the knockout. But my coach told me to just settle down and do what I do. I'm ready for more. I'll do even more in the future. I want everyone in St. Louis to know I came back with the win."

Though Corley's clearly on the downslope of his boxing career arc, It's worth noting some of the other names on the 33-year-old's résumé: Floyd Mayweather Jr., Miguel Cotto, Junior "The Hitter" Witter...and Zab Judah.

Read the rest of ESPN's story here (you'll have to scroll down.)