Most of us who drive like to do so within the lines painted on the road. In fact, straddling the line is usually a sign that you are A) old B) yakking on your cell phone C) drunk.

Recently a Missouri Department of Transportation contractor that was in charge of restriping Interstate 44 created a new scenario, D) trying to figure out where the lanes are. 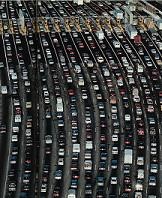 Make that where the fuck the lanes are. In the downpour that started as I was driving on I-44 Saturday night, it looked like there were some new dash-stripes, but they were a little dim. You could still see the old dash-stripes, as well as the right-hand stripe, which was only half-covered with new paving.

My rant aside, this $2.7 million restriping job, performed by Gaines Construction of Wentzville, is fairly important. Good ol’ I-44 is going to be carrying a lot more traffic after Highway 40 closes on January 2. By beefing up the pavement on the shoulders and restriping to create a fifth lane, MoDOT hopes that commute will be a little less hellish.

So, in the name of public service (wink, wink), I placed a call to MoDOT this morning. Community relations specialist Jack Wang explains that cold weather made it difficult to apply the road paint. He tells me that crews are out there, as we speak, touching up some areas.

As for grinding out the old paint, Wang says, they just didn’t get all of it.

“It’s gonna just disappear on its own with traffic moving over it and dirt and all that.”

What about the accidents that result in the meantime?

Wang calls back a little later to say, “Some of those lanes have started to fade.”

And, Wang says, the crews will be back out there tomorrow. “They’re going to get to all of it.”