Earlier this week the Post-Dispatch’s suburban sibling St. Charles Journal ran a heartbreaking story by Steve Pokin about the suicide of an awkward thirteen-year-old from Dardenne Prairie, Megan Meier. 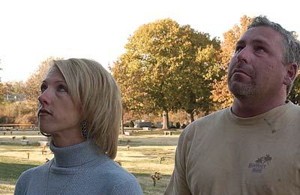 Megan Meier's parents, Tina and Ron Meier, at their daughter's gravesite.
The story chronicles how Megan, who’d recently had a falling-out with one of her friends, met a sixteen year-old boy on MySpace who went by the name “Josh.” All was well the afternoon last fall when Megan returned home from school to find a message from Josh saying that people had told him she wasn’t a good person, and he didn’t want be her friend. This set off an intense IM exchange between Megan and “Josh,” who kept up his barrage of insults. By day’s end, Megan shut herself in her room. Her parents were concerned, and when they went to check on her they discovered that their daughter had hanged herself in her closet.

It turned out that “Josh” was a phantom friend, created by the former friend -- and by the girl’s parents. What’s more, the family lives down the street from the Meiers on Waterford Crystal Drive.

According to the police report filed in the original story, the former friend’s mother told police that “[she] felt this incident contributed to Megan's suicide, but she did not feel ‘as guilty’ because at the funeral she found out ‘Megan had tried to commit suicide before.’”

Although Pokin knew the family’s name, the St. Charles Journal’s parent Suburban Journals -- like the Post a Lee Enterprises property -- chose not to identify them “out of consideration for their teenage daughter.”

But this story has legs.

Bloggers quickly named Curt and Lori Drew and pinpointed their home, and now the saga is getting national attention.

“[O]n one hand is understandable [not to name the family] but on the other hand, actually fuck that. Fuck your community, fuck any hope for cordial ties with those people, and ex-friend of Megan's, fuck your parents. One age group's peer pressure is another age group's ‘I don’t want to be the bitch who talked to the newspaper,’” reads a post at Jezebel.com.

A response on the same site, which was also highlighted on journalism Web sites, reads, “Every day newspaper journalism as we know it gets one step closer to death, as readers turn to blogs and TV and other media for information. This wimp of an editor, who doesn't have the guts to name the wrongdoers involved, has just hastened our eventual demise by at least another week or two.”

If the Suburban Journals are taking heat, it can’t compare to what the Drews are likely going through. A call to their home went unanswered, but if posts like, “I hope these fuckers burn in hell,” are any indication, it looks like there may soon be some shattered glass on Waterford Crystal Drive.