“Everyone wants to know how you get Elvis’ liver,” says Bill Beeny, the Baptist minister who for the past seventeen years has manned his Elvis Is Alive Museum 55 miles west of St. Louis in Wright City.

But Beeny, who wears his jet-black hair in a thinning pompadour and sports a matching penciled mustache, says he’ll never reveal who gave him the tissue samples he says prove that the body buried at Graceland is not Elvis Presley. 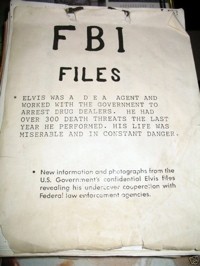 Beeny says the donor, a doctor, swore him to secrecy.

“He said: ‘You must never use my name,” says Beeny. “The National Enquirer wanted to run a deal on it. We agreed on everything and got down ready to close, and they said, by the way, we need the doctor’s name to verify this, and I said, ‘I can’t give you that.’ They said, ‘You will not turn down this figure.’ And I said, ‘Yes I will,’ because I promised the doctor. It kind of pained me. It wasn’t a happy day for me.”

But that was a long time ago. Now Beeny, who has authored two books on the subject -- Elvis’ DNA Proves He’s Alive! and DNA Proves That Elvis is Alive! -- has placed the entire contents of his museum up for auction on eBay.

Beeny wants to concentrate on his conservative Internet radio station, Mighty Stream Radio, and turn the museum space over to a food-outreach charity. Come tomorrow, he hopes to sell the countless newspaper clippings he has pasted to the museum walls, the casket containing a plaster bust of the King lying in state and the 1974 Cadillac parked out front.

Not only that, Beeny’s ready to sign over the rights to all future purchases of his books. He’s willing to part with the tape-recording of Elvis that he says was made seven years after the King’s “alleged” death, and he’ll even throw what he says are 3,500 pages of government documents that indicate that Elvis was actually an undercover agent for the FBI and is now in a witness-protection program.

Beeny has never charged admission to the museum, but he says the new owner could make a killing.

“We’ve never kept tabs, but sometimes in the summer you can hardly get around in here for the people,” says Beeny. “We have a lot of people who will plan their vacation to come by here -- we’ve had hundreds and thousands of people.”

Potential bidders had better hurry. The auction ends today at about 5:15 p.m. As of this writing, the top bid is $8,300.

Oh, and another thing: Beeny doesn’t ship, so you have to pick it up.

Any chance the King will return to claim his stuff? Beeny doesn’t think so.

“Elvis could be anywhere. At the end he was very tired of being Elvis,” says Beeny. “I think he’s gone to Graceland. He loved Graceland, and nobody can go upstairs at Graceland -- not the cleaning lady, not the guards, no one. I think he’s there, but everywhere you turn with Elvis there’s some kind of mystery.”