News broke today that the St. Louis Cardinals have a new general manager. John Mozeliak, formerly the Cards' assistant (and more recently interim) GM, will accept a three-year deal and replace Walt Jocketty as the man who calls the Cards' personnel shots. 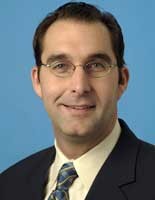 John Mozeliak
Reports over the weekend asserted that the job had been offered to Cleveland Indians assistant GM Chris Antonetti, who was said to be in contract talks as recently as Monday. If the name doesn't ring a bell, Antonetti is widely tagged as the next great general manager to come from the Indians organization. The blog USS Mariner, which staged a yearlong campaign urging the Mariners to fire their current GM and hire Antonetti, has a nice breakdown of just how successful that lineage has been: All four teams in the American and National League Championship Series this year were captained by protégés from the Tribe's front office.

Speculation abounded that Antonetti, with his penchant for statistical-based player evaluation would have been the perfect partner for Jeff Luhnow, the Cards' wet-behind-the-ears director of player development who is likewise grounded in sabermetrics.

Last week Antonetti was quoted as calling the Cards job "one of the best in baseball" and "a unique opporutnity." Since then the Indians have purportedly given him a raise and all but promised him the GM job once Mark Shapiro, who currently holds the position, is promoted to team president.

But perhaps not coincidentally, Antonetti dropped out of talks with the Cards the same day they signed manager Tony La Russa to a two-year contract that makes him the highest-paid manager in baseball...until Joe Torre signs with the Dodgers.

In the Post-Dispatch article announcing Mozeliak's hire, Joe Strauss hinted at why Antonetti likely declined the job, writing, "[Antonetti] harbored reservations about the amount of control that would be given Jocketty's successor."

Surely Mozeliak knows what he's getting into. Not only will he have to work with Luhnow, whom team chairman Bill DeWitt reportedly lets call most of the shots and restock the Cards' depressingly talent-barren shelves, he must also manage his manger's ego.

Watching the fresh-faced 39-year-old interact with the 63-year-old future Hall of Famer ought to be fun.

La Russa addressed the topic of age difference at the press conference announcing his new contract, essentially calling out his younger co-workers by saying, "I would venture to say that the guy who comes in, if he's half my age, probably goes to less rock and roll shows than I do, I'm young at heart. I'm going to see The Boss (Bruce Springsteen) in Oakland on Thursday. I'm not worried about (age difference) at all. I don't feel it."

Mozeliak has already begun to make his mark, picking up the option of aging closer Jason Isringhausen and renewing the contracts of setup man Russ Springer and inconsistent starter Joel Pineiro.