Your daily guide to what they're whispering about in the next cubicle.

HERE Check out A to Z for a local-ish news round-up.

Ian takes a peak at Flaco's Cocina on Delmar. 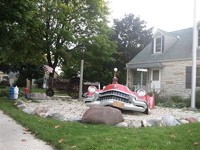 This yard is much worse than a pink flamingo-laden one. (Via STL Rising)

OK, who said we want to be the next Cincinnati? Sheesh.

Were you at Velvet on its last night open? Annie wrote about the infamous Washington Avenue techno club's final days two years ago.

THERE Holy shiitake! Those are some bloody mushrooms.

This is the kind of PSA that'll freak parents out even more.

Some say Blackout, Britney Spears' new album, is crap , while others say it's genius. We prefer the acoustic version.

Google doesn't want spam in your inbox. They even made a video about it.

Terrorize everyone in the neighborhood with a motorcycle-riding, bad-to-the-bone skeleton.

EVERYWHERE The crew of a hijacked ship kicks some major pirate butt.