Attorney Lisa Krempasky didn't return repeated phone calls when I was researching "Mystery Woman," a 2006 story about her involvement in one of this town's largest real estate scandals in recent memory.

Nor did the attorney respond to inquiries about the estate of the late Chuck Norman, the legendary founder of WGNU (920 AM), who left Krempasky in control of his trust following his 2004 death.

Real estate records on file with the city reveal that Krempasky invested millions of dollars from the Chuck Norman Trust into property controlled by a company called DHP Investments, owned by a man named Doug Hartmann, who now faces federal fraud charges.

Some beneficiaries of the trust believe Norman bequeathed $10,000 to every staffer employed with WGNU for a period of three years prior to his death. Those several dozen former staffers say Krempasky has kept them in the dark too.

But last week Krempasky surprised beneficiaries when she sent a two-page letter explaining for the first time how she became entangled in Hartmann's alleged massive real estate boondoggle. In contrast to the belief of the many beneficiaries who view Krempasky as a co-conspirator in the scam, Krempasky paints herself in the letter as a victim. 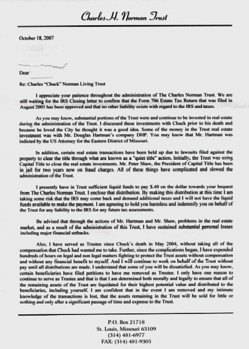 In the letter, Krempasky asserts that Norman wanted his money invested in the condemned and boarded-up hovels that made up Hartmann's real estate empire.

"I discussed these investments with Chuck prior to his death [in 2004] and because he loved the city he thought it was a good idea," writes Krempasky, who served as attorney for DHP Investments during a period when the company bought hundreds of dilapidated homes and other buildings in St. Louis. Few of the homes were ever rehabbed as promised.

This past summer Hartmann was indicted on federal charges of bank and mail fraud.

Many of Hartmann and Krempasky's real estate transactions went through a now-defunct title company called Capital Title. Krempasky acknowledges in the letter that associating with Capital Title led to complications. "Mr. Peter Shaw, the president of Capital Title, has been in jail for two years now on fraud charges," she writes. "All of these things have complicated and slowed the administration of the trust."

Although Krempasky has denied beneficiaries' repeated requests that she be removed as trustee and that they be allowed to examine the trust's financial statements, the attorney claims in the letter that she has gone without "all the compensation that Chuck wanted me to take" and says she's worked hundreds of hours "without financial benefit to myself." Last month Krempasky -- who also controlled WGNU after Norman's death -- sold the station for $1.25 million. She does not mention that sale in the letter or say how she intends to use the proceeds form the station.

In closing, Krempasky ensures the beneficiaries that she'll continue "morally and legally" to get them the rest of the money she has denied them since 2004. "I have spent the better part of the last two years involved in litigation regarding the trust and trust assets," she writes. "Believe me when I say that I have not enjoyed one minute of being involved with all of this litigation, lawyers and legal fees."

I tried to reach Krempasky to ask her about the letter. Those calls have not been returned.