Big Boobs: Read All About 'Em!

"While approved by the FDA, silicone implants are clearly dangerous, and [Amy Bertrand's] article did not mention any of these well-known dangers. Furthermore, as Ms. Bertrand conveyed to me today, she relied on the FDA for the legitimacy of this article. I would argue for a higher standard. The FDA approves microwaving plastics even though it is incontrovertible that the superheated plastics create carcinogens. The FDA is no longer the leading authority on health in this country and has become highly politicized and compromised by commercial interests, as any good journalist would know who researched her sources. This newspaper has done a great disservice to the public and women will be seriously injured due to this article. How will they make amends and safe a lifetime of suffering from occurring?"

In the column to which Mindlin objects, Bertrand responds to a reader's query regarding the "drawbacks" of silicone and saline breast implants. The Post health and fitness editor does so by consulting Dr. V. Leroy Young, chief of surgery at Barnes-Jewish West County Hospital. Young, Bertrand writes, can "[help] us sort out the confusion."

Young ticks off some drawbacks to breast implants: Thin people sometimes prefer silicone to saline because "there is less skin wrinkling or folding." And of course, the doctor allows, "Every implant, if you have it long enough, will rupture.... When a saline implant ruptures, the body absorbs it, you pee it out. And when you remove it[,] [i]t's a simple procedure. When a gel (silicone implant) ruptures, you can't tell. You have to get an MRI."

P-D health and fitness editor Amy Bertrand
Acknowledging that "when the FDA approved silicone implants recently, it said all patients should get an MRI every two years to see whether the implant has ruptured," Young underscores that it's important for women to follow the guidelines. "I don't think we should blow off the regulatory aspects of this," he tells Bertrand. "If you have a rupture, that gel could get into the breast tissue and it's difficult to remove.... It's a longer, more involved operation."

Now back to Mindlin:

"When [silicone implants] leak -- and they will -- it causes debilitating illness such as connective tissue disease and massive problems with joints and tissue. One of my best friends has suffered for decades from the tremendous pain and illness due to leaking silicone implants, and not one doctor told her about the possible consequences of leaking implants."

One might quibble that asking a plastic surgeon to supply the unvarnished lowdown on the perils of breast implants is akin to asking a Wal-Mart exec to present the pros and cons of making employees foot the bill for their own health insurance.

But heck, even a cosmetic surgeon is, well, a doctor. For that matter, Bertrand herself might at least have provided a smattering of context beyond her introductory "Since the FDA dropped the ban on silicone implants in November...." 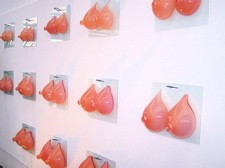 A year ago next month, the U.S. Food and Drug Administration lifted a fourteen-year ban on silicone breast implants. But those who opposed the lifting of the ban didn't go down without a fight.

An excerpt from this New York Times story [reg. req.]:

"The [FDA] decision appeared to end a controversy over the safety of silicone implants that lasted more than two decades and resulted in thousands of lawsuits by women who claimed the implants leaked and caused a number of diseases, including cancer and rheumatoid arthritis. The dispute led to the bankruptcy of the manufacturer Dow Corning, a federal moratorium on the use of the implants, and, finally, findings by both the Institute of Medicine and the Food and Drug Administration that the devices do not cause major illnesses....

"Critics of the agency said...the devices should not have been approved, and cited the same safety concerns that have dogged the devices for years.

"Dr. Sidney Wolfe, chief of Public Citizen's Health Research Group, which claimed in the 1980s that breast implants cause cancer, called the implants 'the most defective medical device ever approved by the F.D.A. The approval makes a mockery of the legal standard that requires "reasonable assurance of safety.""

The American Society of Plastic Surgeons (ASPS) applauded the FDA decision. Today the society estimates that its members' patients choose silicone implants 40 percent of the time.

One glaring risk associated with implant surgery is suicide. As reported in The Annals of Plastic Surgery, a recent study found that breast-implant recipients in Sweden were three times as likely to take their own lives as natural-boobed women. Those findings are consistent with a prior study involving Danish women, published in 2004.

Of course, this could mean that women who choose to have breast implants are already predisposed to suicide. Still, it would seem to qualify as a "drawback."

In a press release early this year titled, "Patients Agree They Should Have Done More Homework Before Surgery," the ASPS acknowledges that "40 percent of women believe they should have been more proactive in learning about potential side effects and complications before [cosmetic surgery]."

Here's one more finding, published in Plastic and Reconstructive Surgery, the official journal of the ASPS: Reality TV shows such as ABC's Extreme Makeover and FOX TV's The Swan directly influence first-time patients who are considering cosmetic surgery.