In the end, neither a letter from Governor Matt Blunt nor the recommendation of St. Louis Mayor Francis Slay was enough to sway the jury. Mickey Carroll -- one of the few surviving Munchkins from the Wizard of Oz -- will not get a star on the St. Louis Walk of Fame. Not this year, anyway, and perhaps not in Carroll's lifetime.
Jennifer Silverberg 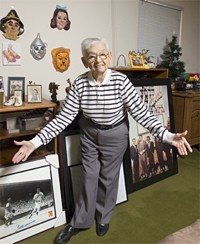 Despite his pleas, Mickey Carroll isn't destined for the St. Louis Walk of Fame.
For the 88-year-old former actor and his caretaker, Linda Dodge, the rejection ends a six-month campaign to include Carroll among the dignitaries whose names adorn the sidewalks of the Delmar Loop. In early summer Dodge organized a petition drive urging the founder of the St. Louis Walk of Fame, Blueberry Hill owner Joe Edwards, to put the Munchkin on this year's ballot. Edwards later threw out hundreds of the petitions when he discovered inaccuracies in Carroll's official biography, including claims that the Bel-Nor resident once starred in the Spanky and Our Gang series. "I had to consult with a Wizard the Oz scholar and author who helped me sort out which facts in Mickey's bio were accurate," notes Edwards. "He wasn't in the Our Gang series, but he was definitely in the Wizard of Oz." After some initial hesitation, Edwards says he decided last month to include Carroll among the list of candidates he delivered to the Walk of Fame's 120-person selection committee. "The committee selected three outstanding nominees for induction," says Edwards. "Unfortunately, Mickey wasn't one of them." Edwards plans to announce the winners next spring. Because Carroll received less than 50 percent of the vote, Edwards says, the Munchkin will not be considered again next year. "Perhaps in five years or so Mickey can once more be on the ballot," he offers. That's little comfort to Linda Dodge, who fears the Carroll may not be around for another vote. "We wanted to do this while he was alive. That's the whole point," she says. In November Mickey and a few of the nine surviving midget actors from the 1939 film classic will be on hand when the Munchkins receive a star on the Hollywood Walk of Fame. Dodge believes that honor, as well as letters of recommendations from Gov. Blunt, Mayor Slay and retired St. Louis Cardinal great (and St. Louis Walk of Fame inductee) Lou Brock, should have been enough to earn Carroll a star in his hometown. "I really thought we had the momentum," says Dodge, adding, "We're not by any means finished in our efforts." After Riverfront Times first reported on the controversy surrounding Carroll's nomination this summer, several readers wrote in alleging that the Munchkin had a history of misstating the truth. Among the fables he's allegedly told -- they claim -- was that he played the Munchkin coroner in the 1939 movie and that Judy Garland, herself, recruited him for the film. "I never told anyone I was the coroner," counters Carroll, who played a soldier and other Munchkin roles in the movie. "But I did do the coroner's voiceover. And, yes, Judy did recruit me for the film. I didn't want to do it because it only paid $35 a week. Then she put Victor Fleming [the film's director] on the phone, and he convinced me." How or why Carroll's name later became associated with the Our Gang series remains a mystery. "I wouldn't dare be on that show," says Carroll, who was born Michael Finocchiaro. "They got $25 a week to work three days a week. That was for kids with no talent." Carroll describes his rejection from the St. Louis Walk of Fame as a "kick in the head" but says it won't discourage him from continuing to make public appearances and raise money for charity. He estimates he's used his Munchkin fame to raise $2 million to $3 million over the years. "I've got millions of fans out there, and I know I'm loved in St. Louis and the world over," says Carroll. "It's Joe Edwards who really should be worried. He's got a Walk of Fame with hardly any lifelong St. Louisans like me on it. You walk down the sidewalk and you think, 'Who are these people?' It's full of strangers."