Your daily guide to what they're whispering about in the next cubicle.

Annie Zaleski gears up for a lengthy essay on Stereogum's tribute to R.E.M.'s Automatic for the People. 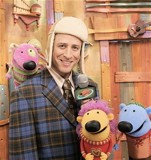 THERE Watch Wal-Mart spread like chicken pox across America. (Via Boing Boing)

EVERYWHERE Thank God. Now let's hope they can get the rest out, too.