Richard Gaines, a member of the Special Administrative Board of the St. Louis Public Schools, presided over the first meeting of the board's new High School Athletics Committee Tuesday night. It's the first committee of its kind for the district, and its purpose is to restore long-lost glory to the Public High League. 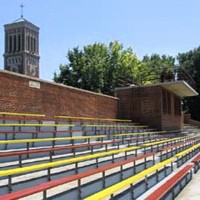 Go Soldan!
Gaines, who played basketball for Vashon High School in the 1960s, marshaled a mix of business, athletics and education leaders in St. Louis to volunteer for the committee. Among them: Frank Viverito of the St. Louis Sports Commission, Tom Irwin of Civic Progress; Kathy Osborn of the Regional Business Council; Deborah Powell-Childress, former mayor of East St. Louis, and the athletics directors at Wash. U., SIUE and UMSL. Thom Kuhn -- whose nonprofit group, PHL, Inc., has been working miracles for the SLPS by restoring fields and facilities during the last two-and-a-half years -- is also a member.

The district's biggest problem is its dwindling budget -- about $75,000 per school this year. That figure includes salaries and covers all teams. Gaines is said to favor the creation of an athletic endowment, presumably with private funds, that could eventually sustain the public schools' athletic program no matter the financial straits.

But the committee's immediate task is to examine the district in comparison to others in the metro area and issue recommendations for improvements. The process will take the entire school year.

Gaines said he believes in "linkages" between academic and athletic successes -- a fundamental reason for evaluating the district's program. He said he is also hoping to restore a lost sense of community:

"This is part of our process of bringing people back to the schools, and not just the children."