Was it the piñata, Homer Simpson or Charlie the Tortoise that kicked Chris Duncan where it counts?

When it came to the latest below-the-belt blow to the St. Louis Cardinals' postseason hopes, the warning signs, reportedly, were there: Manager Tony La Russa has gently hinted that Duncan's baggage has bothered him for the past six weeks. But the Cards skipper had been cagey about the precise nature of his star left fielder's affliction, referring to it as "a lower-half injury."

That all went by the boards in Phoenix over the weekend, after Duncan was forced to depart Saturday's game against the Arizona Diamondbacks, having fallen victim to the euphemistically named "sports hernia."

According to WebMD, a sports hernia is a groin injury that occurs from "overuse of groin muscles, which causes stress on the inguinal wall." The injury can occur "when too much stress is placed on an area...[which] often happens when you overdo an activity or repeat the same activity day after day."

As faithful readers of STLog are well aware, Dunc's groinal region has been under a great deal of stress over the past ten months, having been made to dry-hump everything from the World Series trophy to an oversize copy of Harry Potter and the Deathly Hallows.

Now the slugger's hurting -- in a big, big way: "It can be pretty debilitating," confirms Rick Lehman, medical director of the U.S. Center for Sports Medicine in Kirkwood. "It's a breakdown or tear in the floor of pelvis, which is the kind of gristly thing that holds the muscle structure of your groin together. Every time you stride it, hurts. It's like if you wear same pair of pants for five years straight, the material in the crotch will get kind of thin and banged up."

The down-low damage will more than likely end Duncan's season and require surgery to repair. Call it humpus interruptus.

And Unreal is left to wonder: What, precisely, kicked Dunc in the junk? 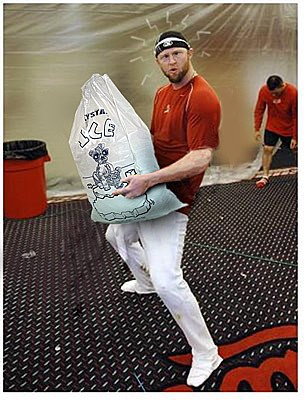