Dan Horkheimer: "He Loved the Community"

He could speak German and Mandarin Chinese and was learning Spanish and Bosnian.

He helped drive a neighbor boy to school.

He lived with his wife in the north-side neighborhood of St. Louis Place. That's where Horkheimer was on a Saturday morning, August 11, when an unknown assailant shot and killed him. He had been painting his windows outside. 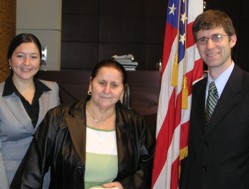 Dan Horkheimer with an unidentified woman (left) and Bosnian immigrant Mine Galijasevic at a naturalization ceremony last December.
Police will add the crime, which might have been a botched robbery, to statistics that now include a child stabbed to death by another child, a cop allegedly killed by a teenager and a multitude of other shootings this summer.

People who knew Horkheimer will keep him as an example of how much one dedicated person can accomplish for his fellow man.

Meticulous, thoughtful and giving, the 29-year-old was good in a way that even fellow do-gooders who worked with him, advocating for immigrants, say they rarely witness.

"I knew he had community connections, but I had no idea he was so involved in so many different organizations until the funeral," says Kim Allen, staff attorney for the Immigration Law Project at Legal Services of Eastern Missouri.

Horkheimer was not a lawyer, but he was head of Legal Services' immigration unit and an accredited representative, licensed by the Department of Justice to advocate for immigrants in court and at all levels of the administrative process.

"Dan, in his quiet, effective way, would reach out to these folks," adds Dan Glazier, executive director and general counsel at Legal Services. "All those pieces of the quilt of Dan’s life came together."

Horkheimer grew up around Milwaukee, Wisconsin. (His only nearby relative is an aunt who lives in Illinois.) He earned his bachelor's degree in December 2000 from Saint Louis University, where he met his future wife, Courtney Barrett. Barrett had lived at the Catholic Workers' Karen House in St. Louis Place, and the two bought their home in the same neighborhood. (Catholic Workers, who live with the homeless people they serve, have had a presence in St. Louis Place since the 1970s. As Riverfront Times editorial fellow Molly Langmuir detailed in a January feature article "Cool to be Kind", they are attracting new devotees with new ways to serve.

Horkheimer and Barrett remained part of the Catholic Workers' extended network after they married in the fall of 2003. Their house, a former four-family flat on North Market Street, was the scene of many a dinner party that included a diverse group of friends and neighbors.

"He just loved the community," says Katie Herbert Meyer, who worked with Horkheimer at Legal Services and is now the legal director at Interfaith Legal Services for Immigrants. "The rest of us, we dedicate our work to it. I have to be able to go home and have time to myself. He continued his work, even when he went home. I don't think he ever considered it a sacrifice."

Herbert Meyer says Horkheimer and his wife helped friends build a solar-powered house down the street. And they hoped to start a college scholarship fund for kids from their neighborhood.

Horkheimer, whose degree was partly in international studies, started with Legal Services as a full-time volunteer in September 2001 and had a full case load by the time he filled a paid staff position in 2003, says Angie O'Gorman, his former boss and founder of the Immigration Law Project. O'Gorman has returned to Legal Services to pick up Horkheimer's work.

The legal team credits Horkheimer with bringing to their attention the large number of elderly Bosnians who were in danger of losing social security benefits while they waited, some for as long as two years, for the government to act on their citizenship applications. Instead of letting cases to trickle in, Legal Services, SLU's School of Law Clinic and Catholic Legal Assistance Ministry brought a suit on behalf of 50 Bosnians, who became citizens last December. Another group of about 30 Bosnians in the same situation were naturalized this summer.

Mary Anthony, an immigrant advocate who worked under Horkheimer, helped notify more than 160 clients of his death. Many cried, and some were scared, she says. "Dan was their lifeline."

Horkheimer's work helped stop the deportation of an Ethiopian refugee who was facing drug possession charges, Allen says. "He had seen a lot of torture and a lot of killing in his country," she says of their client. "Dan found an expert to talk about trauma and its effects on survivors." Horkheimer added the expert's affidavit to a voluminous brief on Ethiopia and what the man might face if sent back there. "The judge couldn't say enough about how impressed he was with it."

Herbert Meyer, who is familiar with the case, remembers that Horkheimer obtained permission to bring a shirt, tie and pants so the Ethiopian man wouldn't have to wear his prison-issued orange jumpsuit in front of the immigration judge.

"I've had clients before who were detained and it never crossed my mind," Meyer says. "He had to make phone calls, and get it approved, but he did. It's just little things like that."