Who hasn't visited the Saint Louis Zoo on a hot summer afternoon and felt a little sorry for the polar bears?

Make that polar bear. Hope's the only one left. Churchill and Penny died in 2005. 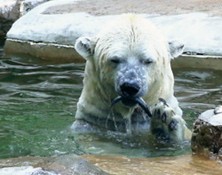 A local whistle blower tipped the animal-activist group People for the Ethical Treatment of Animals that there was more to Churchill's death than the zoo was letting on, and the U.S. Department of Agriculture investigated.

Now the zoo will pay the USDA a $7,500 civil penalty, part of consent decision and order in which the zoo doesn't admit to the specific allegations but agrees to good behavior in the future.

Churchill died with a wad of rags and plastic bags in his gut. The USDA alleged that around May 20, 2005, the zoo failed to remove junk from his enclosure. Then, the USDA alleged, a curator "who was not a doctor of veterinary medicine" was allowed to "override the attending veterinarian's repeated recommendation that exploratory surgery be performed on a male polar bear who exhibited signs of abdominal pain, distress and discomfort."

Meanwhile, Penny had been implanted with a contraceptive device in May 2004. The device was not supposed to be used in pregnant bears, but when Penny died a year later she had two fetuses in her uterus. The USDA alleged that the zoo had failed to keep her apart from her male pen-mate and that she was implanted just days after he "exhibited persistent breeding behavior and interest in her."

The zoo did not return phone calls requesting comment about the fine.

Lisa Wathne, a specialist in captive exotic animals with PETA in Seattle, is more forthcoming. "It's wonderful and appropriate that the USDA did take action," says Wathne. "Two polar bears are dead because of the zoo's incompetence and negligence. This USDA action and this measly $7,500 fine doesn't do anything to help these bears."

Wathne adds that PETA is trying to help the zoo's remaining polar bear, Hope: "We wrote and asked them to send her to an appropriate facility and completely close the polar bear exhibit. Of course, we didn't get a response to that."

Wathne says she visited the zoo's polar-bear exhibit three years ago, while Churchill and Penny were still among the living. She was in town for a protest involving Edith, a chimpanzee PETA has been trying to get the zoo to adopt. Edith was born here but now resides at a roadside attraction in Texas.