"The Adventures of Aaron Proctor in St. Louis"

About the blogger: "I'm former Pasadena (California) human-relations commissioner, Aaron Proctor. On May 7th, 2007, I lost my job. At 25 years old, I had no other option but to move in with my parents while I re-establish myself. So, I'm re-establishing myself: thousands of miles away in St. Louis, Missouri."

It's my 12th day here in the "Heartland" ...or as I'm calling it "Aaron Proctor's Heartland Exile: Day 12." Now I've witnessed some pretty dumb (or let's just use a synonym: "Midwestern") things in my 12 days here. People pronouncing the state "Missoura." More churches per square mile than Jerusalem. An anti-abortion television ad just about every commercial break. Bud Light is considered a fancy libation. Or a person drawing a blank stare anytime I use a word with more than two syllables (and then have the intestinal fortitude to try and explain something to me!)

This little St. Louis "gem" takes the cake, though: http://www.beckyscarpetandtile.com/ 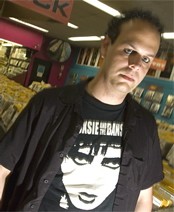 Proctor in exile
Becky's Carpet and Tile. Go meet Becky. She flies around on a carpet. She has been around for many years, had modest success with her business, and still can't afford a decent commercial. She also, apparently, hasn't been around a mirror in those same amount of years. Maybe some type of mixture of everyone in St. Louis, Becky's Carpet and Tile reeks and screams of Midwestern pseudo-affability. Move over Crazy Eddie, Jack Steffan, and Adee Do — there's a new crown jewel in television cheese.

I've also learned some slang while I've been here. The term "Hoosier." I normally thought of the term Hoosier as the way to describe either a person from Indiana or a fan of Indiana University's sports program. However, I've learned the term is kinda similar to the older California insult/term, "Okie." If you're not familiar with the slang term "Okie," it's an insult used by Californians during the days of Route 66 to describe the borderline retarded (or let's just use a synonym: "Southern") people who now make up the "great" cities of Bakersfield, Fresno, and Fontana. The term was derived from the mass exodus of people from Oklahoma to California who were tired of the dust bowl but also were afraid of reading books. At least one of those two things have carried on in their lineages.

Know of an Unreal-worthy local blog? Send the URL to unreal@riverfronttimes.com