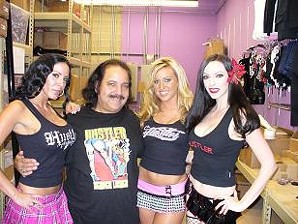 Of course, no one ever accused the actor (whose hairy torso earned him the nickname “The Hedgehog”) of being clean. Far from it, we want our Ron Jeremy dirty, and that’s just how I found him last night at the grand opening of Hustler Hollywood in Berkeley.

The 54-year-old actor has appeared in 1,700 X-rated films, but these days his stock-in-trade is autograph-signings and celebrity appearances. The events have him on the road so often, he can’t say for certain the last time he visited his California home. 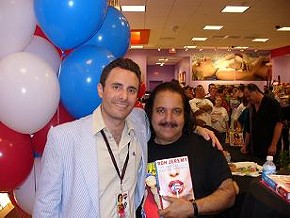 The blogger and his freshly signed book.
Jeremy is discussing his background as a school teacher and his work for the animal-rights group PETA when a publicist walks through the storage room. Larry Flynt has just arrived from the airport and soon the adult-film actors will join him in signing autographs for the 200-plus people forming a line around the store. “The police are outside,” warns the publicist. “So ladies, remember, no nipples.”

Seated in his golden wheelchair, Flynt tells me that no one has fought harder than he to ensure Americans’ their right to freedom of expression. “Name one other person who’s been to prison six times and shot and paralyzed for defending our freedom of speech?” asks the Hustler publisher, his voice still slurred from a stroke.

“Today there’s too much apathy about the 1st Amendment. People take civil rights for granted,” he continues.

When asked how he compares to Playboy publisher Hugh Hefner, Flynt shoots back: “He’s a coward. He would never stand up to defend freedom of expression. Deep down Hef wishes he was publisher of Time magazine. He’s ashamed of his role in pornography.”