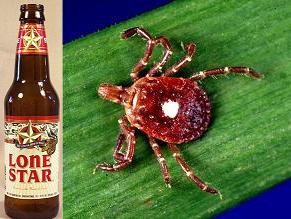 Not that Lone Star, this Lone Star
A surge in tick-borne illness and the death of a child in northeastern Missouri have prompted the Department of Health and Senior Services to issue a warning to the public and the medical community.

The Lone Star tick, which is prevalent in Missouri -- including in urban areas like St. Louis -- is a vector for bacteria that cause ehrlichiosis and Rocky Mountain spotted fever.

Ehrlichiosis is like Rocky Mountain spotted fever but without the telltale rash.

“The bacteria really makes a major assault on the body and is very dangerous if not recognized,” says Karen Yates, coordinator for the department’s vector-borne disease program.

Treatment requires the tetracycline group of antibiotics, and Doxycycline is the drug of choice, Yates says.

The department has seen a spike in reported cases of ehrlichiosis and Rocky Mountain spotted fever this year. What makes the numbers troubling, Yates says, is that they are backed by the knowledge that the infections are current. In other words, DNA-based tests identified bacteria live in the bloodstream, not just some antibodies hanging out after past infections.

Lyme disease has received a lot of attention, but it is not as prevalent in Missouri, mainly because its carrier, the eastern deer tick, prefers deep forest with a moist climate. The Lone Star tick that transmits ehrlichiosis is well-adapted to the drier climate and grasslands of Missouri, Yates says.

Lone Star for state tick, anyone?