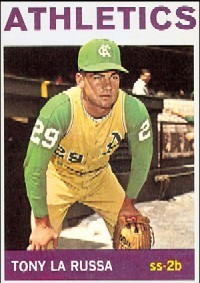 You won't read much that you didn't already know, with the probable exception of the manager's first marriage (which, statistically speaking, yielded two daughters and a divorce), any mention of which has been omitted from La Russa's bio on the Cards' Web site.

What with all the shit La Russa has taken in the first five months of 2007, maybe I'm predisposed to cut him some slack. But here's the thing: In spite of the several high-profile (and idiotic) recent lapses -- the DUI, the petty pouting over the St. Louis Post-Dispatch's (also idiotic) Cubs parody, the fungo-wielding threat leveled at reporters after Josh Hancock's fatal accident -- I not only feel for the guy; I actually find myself admiring him.

He's flawed, obtuse and frequently obnoxious. But he's also intelligent, and principled. You may not agree with his principles, but that doesn't mean he ain't got 'em. Moreover, he does his best to apply them consistently, and that's more than can be said of most human beings.