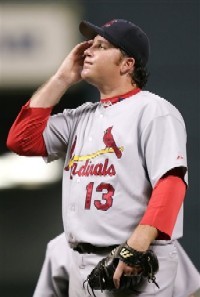 "Jeff is a guy that won't complain about anything and just takes the baseball.... It became obvious to us when he needed to reach back for that little something extra, his arm strength just wasn't there. Once we talked to him, it became obvious that with some time off and a strength program, he will have an opportunity to return to the type of pitcher we know he can be."

With the aid of our patented Bullshit Translator, here's what Bavasi was really saying:

"Jeff's not hurt; he's just pitching like shit again. What was I thinking when I agreed to pay this guy $8.3 million? Right now I'd pay another $8.3 million just for the privilege of kicking [sports agent -- and Weaver's agent] Scott Boras' ass."

Per blogger Larry "vivaelbirdos.com" Borowsky, the Cardinals are rumored to be considering taking Weaver back if the price is right.

That price? Try $2 million (i.e., the Mariners would have to eat the rest), according to Yahoo's Tim Brown -- scroll down (also via Vivaelbirdos).

Meanwhile, former Cardinals punching bag Sidney Ponson has been released by the Minnesota Twins, who'd taken a $1 million flyer on him during the off-season. Over seven starts with the Twins, Ponson had compiled a record of 2-5, with a 6.93 ERA.