How Green Is Your Building? 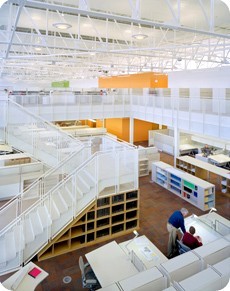 Robert F. Kennedy Jr. -- a master falconer, a fisherman, a Kennedy -- got a standing ovation last night before even getting positioned at his speaking podium inside Alberici Constructors Inc.'s "green" headquarters at Page Boulevard and I-170. Kennedy came to town on the eve of the annual Meeting of the Waters conference (amid our rivers' rising, ironically) as a guest of St. Louis Earth Day. For the unawares, Kennedy is an environmental lawyer/advocate -- cultish to some, Christ-like to others -- who may be best known for his work championing the watchdog group Riverkeeper and its battle to restore New York's Hudson River.

An impassioned orator, Kennedy carried on without pause for a good 90 minutes, trotting out so many obscure religious, historical and artistic references that the presumably highly educated crowd had to start feeling sheepish after a while. The bulk of the speech blasted the Bush administration's record on the environment and what Kennedy referred to as "a lazy, indolent press."

Surprisingly (or not?) Kennedy said he works for candidates on both sides of the aisle come election cycles. Interestingly, he said he gives 20 to 30 speeches a year to "red-state, all-Republican" audiences. "I get the same response from them as I do at liberal colleges," he said. "The only difference is the Republicans come up to me afterward and say, 'How come I haven't heard any of this before?' I say, 'Because you listen to Fox News and Rush Limbaugh.'"

Kennedy had harsh words for corporations ("They should not be allowed near government") but said that true free-market capitalism is actually good for the environment ("In 100 percent of cases, good environmental policy is good economic policy").

He extended a special thanks to "the Busches" -- meaning Adolphus Busch IV and his mother -- for helping bring about his visit. According to St. Louis Earth Day executive director Terri F. Reilly, the Busches' Great Rivers Habitat Alliance was a sponsor. Kennedy commands hefty speaking fees ($30,000 to $50,000, according to this cached Web page); Reilly declined to say how much it cost to reel him in.

Reilly couldn't have been happier about the 350 people who hiked out to Alberici for the sold-out event. "My whole plan from the beginning was to connect him with that building," she said. "That's such a jewel we have here in St. Louis. When it was built [in 2004] it was the greenest building in the world. Now it's one among a bigger group." [Update 5/11/07: A call from Alberici and a long tour through the U.S. Green Building Council's Web site reveal that Alberici HQ remains the greenest new building in the world.]

It is quite a sparkling place, even at 9 p.m. You can see for yourself on the first Wednesday of each month from 2 to 3 p.m., when an Alberici employee leads a public tour. Call ahead.