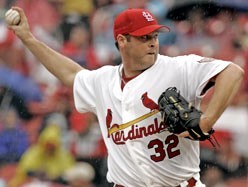 St. Louis Medical Examiner Michael Graham reported this morning that Josh Hancock was legally drunk when he was killed in a car accident early last Sunday morning. Hancock’s blood-alcohol level of 0.157 percent was almost twice the state’s legal limit of 0.08.

St. Louis Police Chief Joe Mokwa reported that Hancock’s rented Ford Explorer was traveling at 68 MPH in a 55 MPH zone along Highway 40 (I-64) near Grand Avenue. He was not wearing a seat belt, and there was no indication that he braked before plowing into a tow truck assisting a disabled Geo Prism.

Hancock was on his cell phone at the time of accident. Police found 8.55 grams of marijuana in Hancock’s vehicle and a glass pipe. Dr. Graham concluded Hancock died of severe head trauma within seconds of the crash.

After the Cardinals game with the Chicago Cubs ended last Saturday at 5:40 p.m., Busch Stadium security cameras captured Hancock leaving the ballpark at 6:35 p.m. His whereabouts over the next two hours remain unknown. At 8:30 p.m. Hancock arrived alone at Mike Shannon’s Steaks & Seafood. Over the course of the next four hours, the relief pitcher ate and consumed several alcoholic drinks and, according to Mokwa, purchased drinks for other patrons.

Hancock left Shannon’s restaurant at 12:28 a.m. At 12:34 a.m. a tow truck arrived at Highway 40 and Grand Avenue to assist the broken-down Geo. Mokwa reported that Hancock received an incoming call at 12:39 a.m. from a female acquaintance whom he declined to name. The two discussed baseball tickets for approximately three minutes before the line suddenly went dead, presumably at the very moment Hancock plowed into the tow truck and perished.

Medical examiner Graham said toxicology reports — which could indicate that Hancock was also under the influence of other drugs — would not be available for several weeks. Mokwa and Graham’s news conference can be viewed on KSDK (Channel 5)'s Web site. For more on the Josh Hancock tragedy, see our earlier posts, Tales from the East Side and Josh Hancock: 1978 – 2007.