Josh Hancock: Tales from the East Side

Ever since the Josh Hancock story took a detour to the strip clubs of East St. Louis, Sauget Police Chief Patrick Delaney has barely had time to hang up the phone. Yesterday evening Delaney was bombarded with a wave of media phone calls following a 5 p.m. story on KSDK-TV (Channel 5) that was the first to link the Cardinals relief pitcher to a fender-bender early Thursday morning (April 26) outside the nightclubs and topless joints of Sauget.

Later last evening, as Delaney was watching his son's hockey game, his cell phone erupted in another round of calls. This time FOX 2 was reporting on its 9 p.m. newscast that an anonymous witness (identified as "Vince" in this morning's Post-Dispatch) claimed to have seen Hancock drinking at Mike Shannon's Steaks and Seafood late Saturday night. "My wife said he couldn't put a sentence together," the self-proclaimed witness told Fox 2, his face concealed from view. "That was her way of saying he'd had too much to drink."

Hancock was killed not long after leaving Shannon's restaurant when his rented Ford Explorer collided with a tow truck on Highway 40 (Interstate 64) at approximately 12:30 a.m. Sunday, April 29.

As Chief Delaney told the reporters the first time they called yesterday: Hancock gave no indication he'd been drinking after a tractor-trailer clipped his GMC Yukon as it pulled out of Yellow Brick Road (home to The Oz, Pop's and the Penthouse Club) at 5:30 a.m. Thursday.

"Neither the officer who arrived on the scene or the truck driver thought Hancock had been drinking," Delaney says. "No field-sobriety test was administered."

Here's the Sauget police report (click to enlarge document in a new window): 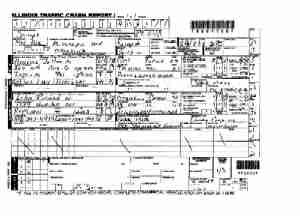 Hancock's Yukon was later towed to a lot, which explains why he was driving a rented Ford Explorer when he was killed days later. Delaney says no one else was in Hancock's vehicle at the time of the accident in Sauget and cannot say for certain where the ballplayer was in the hours or minutes prior to the accident.

"He wasn't at The Oz, because it's closed that day. The Penthouse Club closed an hour and a half earlier, at 4 a.m., and people at Pop's [which is open 24 hours] say he wasn't there," Delany says. "A lot of the Cardinals and other professional athletes go to those clubs, but in our conversation with the management and bouncers, Hancock wasn't one of the regulars."

Another tidbit: "Vince" insinuates that Cards manager Tony La Russa was peeved at Hancock. That doesn't jibe with this (unattributed) assertion in Bob Nightengale's story Sunday on USAtoday.com:

Hancock, whose closest friends on the team were outfielder Chris Duncan and relievers Brad Thompson and Adam Wainwright, left the clubhouse for the final time Saturday in an upbeat mood. He had been told he was the starting pitcher Tuesday against Milwaukee after pitching three innings of relief Saturday against the Cubs.