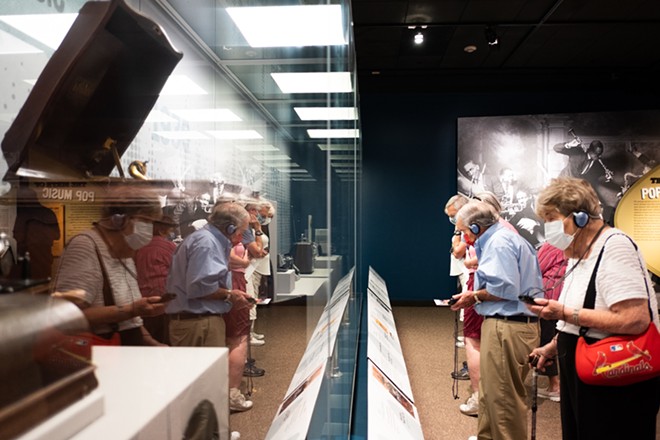 Jane Bergman used to go to shows in Gaslight Square, an entertainment district in St. Louis in the 1950s and 1960s. She describes the belly dancers, the bands and moving from one room playing Russian music to the next playing classical music. Bergman recaps her memories as she stands in front of a Gaslight Square display in the St. Louis Sound exhibit at the Missouri History Museum.

The exhibit explores various aspects of the music scene in St. Louis, with highlights of the city’s musical history from Tina Turner to radio shows to instruments to the Riverport riot. Andrew Wanko, a public historian at the museum, spent nearly four years crafting the exhibit with his team.

“We essentially wanted it to be a well-crafted album,” Wanko explains. “You've got some greatest hits, some deeper cuts, some novelty tunes. We wanted that sort of richness of experience, rather than trying to cram every single St. Louis musician there ever was in.”

Wanko says the museum wants give people an introduction to St. Louis' significance as a music city so viewers can go out and “sort of explore more on their own.”

The exhibit couldn’t have covered every artist or band, and Wanko notes he had to leave out some of his favorite acts. Instead, he says that the museum is telling “the stories that we can tell really well, and just admit that there's so much more.”

“Which, that’s a really good problem to have,” he adds.

SEE ALSO: St. Louis Sound Exhibit at the Missouri History Museum is Worth The Visit [PHOTOS]

As Wanko walks around the exhibit, he points to some of the 200 artifacts the museum has collected for St. Louis Sound, some owned and some borrowed. The museum begins with a look at how people have listened to music over the years, including record players, iPods and even the first recording on tinfoil, which may have St. Louis journalist Thomas Mason’s voice on it.

But there's more than just artifacts. Illustrations done by Chiara Andriole are prominent throughout the exhibit, serving as landmarks for different figures.

There are millions of photos of Tina Turner, Wanko explains, but only one grainy photo of ragtime singer Scott Joplin. Both were important to their genres and for their contributions to St. Louis’ music history, so the illustrations were used to put the artists on an equal playing field.

“We use those illustrations as a way to kind of bring that older music to life and put it on par with some of the more recent stuff that has more visual material surrounding it,” Wanko says.

Touring the exhibit, Bergman and her daughter Barbie Skinner stop often to take in the sights. There’s a dress that belonged to Turner, collections of radios before the FM frequency existed, the old Mississippi Nights sign and other pieces of St. Louis music history.

SEE ALSO: St. Louis Sound Exhibit at the Missouri History Museum is Worth The Visit [PHOTOS]

Memories are scribbled into a notebook outside the Mississippi Nights sign as Wanko flips through the book, looking for his favorite page.

Other scrawlings detail nights at the now-closed venue, tales of drinking beers, working the shows and multiple entries of guests being “pretty sure” they lost their hearing at a concert.

As you turn corners, music plays throughout the exhibit, with Nelly’s “Country Grammar” causing Skinner and Bergman to stop and dance.

Just next to the wall where Nelly's music video is showing, a black box sits for those who are hearing impaired to feel the vibrations of the music. Accommodations are placed throughout the exhibit, including audio descriptions of images for those who may not be able to see the displays.

Interactive displays also come into play here. Screens decorate walls and along displays, allowing for more information on places such as Gaslight Square or for viewers to learn if they would actually like jazz music back when it was created.

“It is an interesting way to get people to look at the wider context of different musical genres and sort of put themselves back in that particular time,” Wanko says.

Back at the beginning of the exhibit, a QR code allows guests to dive into a playlist of St. Louis music. There is old-timey blues, jazz and the “St. Louis Bounce'' music by Nelly, Chingy and J-Kwon. Multiple QR codes are spread out throughout to tune in to the era you’re viewing.

As Skinner and Bergman exit the exhibit, they discuss their plans to bring their friends and family members back. The sounds of “Country Grammar” echo as they walk out, and the two are still dancing along to the beat.

The St. Louis Sound exhibit is open until January 22, 2023. The museum is also hosting several events in conjunction with the exhibit that can be viewed at mohistory.org.

Note: The original version of this story had an incorrect spelling for the illustrator of the musicians displayed in the exhibit. We have since corrected it and apologize for the error.