Music at the Intersection Announces 3-Day St. Louis Festival With 60-Plus Acts 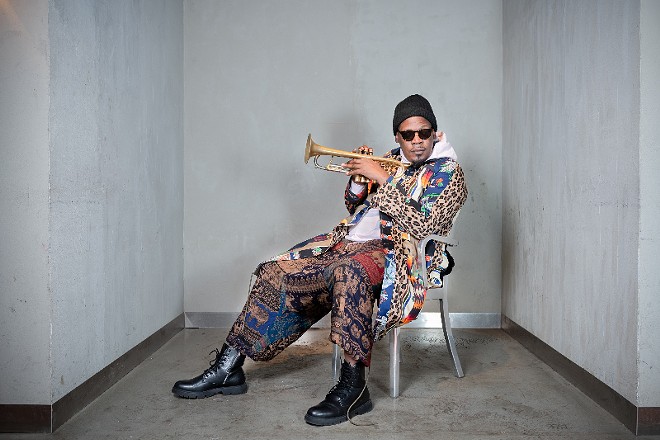 Live music is coming back to St. Louis in a big way this fall, in the form of a three-day festival set to bring some 60-plus acts to six stages throughout Grand Center.

The festival will take place in Grand Center from September 10 through 12, with the Fabulous Fox Theatre, the Big Top, the Sheldon Concert Hall, the Grandel Theatre, Jazz St. Louis and the Open Air tent all playing host. It's a welcome return to live music after an absolutely brutal year brought many local venues and artists to the brink of ruin.

“Our local music economy has taken a hard hit this past year, and it’s time to start healing,” Chris Hansen, executive director of Kranzberg Arts Foundation, says in a statement. “We’re excited to have venues re-opening, our arts community reuniting and fans able to safely enjoy live music again. Our current mantra is ‘mask up and get down.’ With health and safety top of mind, we’re moving forward with a truly unique celebration of St. Louis musical heritage that we hope will have a long-term economic impact for the region and its arts community.”

According to a press release, special care was put into the programming of the festival to ensure that many of its out-of-town acts have St. Louis roots — a key goal for its organizers. Lalah Hathaway, for example, is the daughter of singer Donny Hathaway, who grew up in north city. Additionally, the members of the now New York-based Baylor Project previously lived in East St. Louis; R&B rocker Nikki Hill cut her teeth on stages throughout St. Louis; and members of Gregory Porter's band are based in the St. Louis area.

“This festival is meant to tell the story of St. Louis’ imprint on the American songbook, the relationship we have with our sister cities and the genres that have been birthed and fostered here” Hansen says. “If you love this form of music, you’ll get it. This lineup is deeply representative of St. Louis’ heritage and musical future. For those who don’t go deep on these genres, we hope Music at the Intersection can serve as an immersive education on St. Louis’ incredible musical roots and impact on our culture.”

Another notable artist with St. Louis roots is jazz trumpeter and activist Keyon Harrold, who grew up in Ferguson and has since become a first-call performer who has worked with everyone from Snoop Dogg to Beyoncè to Maxwell to D'Angelo. Harrold's inclusion in the fest comes hot on the heels of him being named creative advisor to Jazz St. Louis, one of the sponsors and participating venues for the festival, for a three-year term in which he is tasked with curating jazz performances with artists working in disciplines spanning dance, poetry, hip-hop and visual arts. His performance at the festival will mark his first in St. Louis since stepping into the new role.

"I am very excited to return to St. Louis because it is my home and I have always been a part of the Jazz St. Louis family. It is exciting to come full circle and I look forward to doing something unique and thoughtful as well as boundary pushing," Harrold said in a statement upon the announcement of his new role. “I plan on bringing a myriad of different voices — unexpected voices — to speak to the consciousness of now and to educate about where we come from musically and culturally.”

The full lineup for the festival are below. For more information, visit musicattheintersection.org: