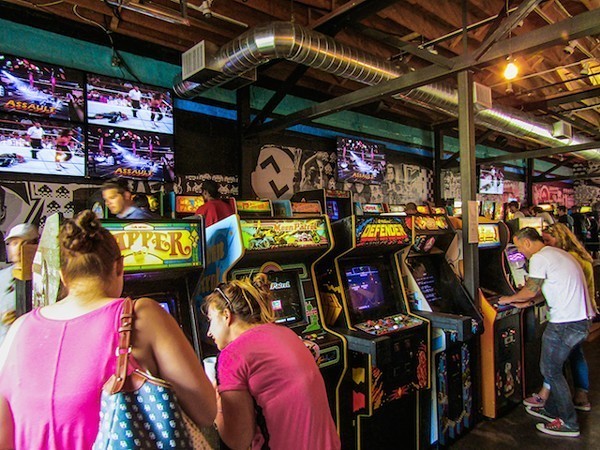 Following hot on the heels of Krispy Kreme's free doughnuts promotion for anyone who has been vaccinated against COVID-19, the Up-Down chain of barcades is offering $5 worth of tokens to anyone who has had their shots in an initiative the company has dubbed "Tokens for Poke'ns."

"Here's how it works: Show us your vaccination card that has both doses accounted for if you've receive the Moderna or Pfizer vaccines, or the single dose accounted for if you've receive the Johnson & Johnson vaccine. We'll give you $5 in free tokens as our thanks to you for helping to keep us and the community safe!" the post reads. "For the first three weeks, anyone who has their full vaccination recorded can stop in to redeem their tokens. After that, guests must stop by within three weeks after getting their final dose to redeem."


According to the New York Times, Up-Down's communications manager, David Hayden, conceived of the idea while waiting in an observation area after receiving his own shot. He tells the paper that the giveaway is meant to give people something to look forward to after getting vaccinated.

“It’s something we anticipated for so long,” he says of the vaccine.

The Times notes that the Krispy Kreme and Up-Down giveaways are part of a larger trend wherein companies across the country are offering incentives to those who choose to get vaccinated. The paper also highlights a brewery in Cleveland that is giving ten-cent beers to the first 2,021 customers who come in and prove they've been poked, as well as a Michigan marijuana dispensary that is handing out free joints to vaccinated people through the end of the month.

But, this being the year 2021 and all, when everyone is hopelessly divided and no one is happy, such promotions have already earned the ire of anti-vaxers and COVID-vaccine skeptics, who have bafflingly found a way to regard such kickass things like free donuts, free weed, free video games and cheap beer as bad, somehow.

As noted by Vice, Krispy Kreme's promotion resulted in a deluge of negativity in its Facebook comment section almost immediately upon its announcement.

“Looks like you are part of indoctrination [sic] of American citizens," wrote one commenter. "If we're good and follow along we get presents. Soon we can get all kinds of free stuff if we go along with getting micro-chipped too, is that how it's going to work?”

“Would you like the unvaccinated to wear a yellow star on their chest?" asked another. "Since you've decided to stray into an area that has nothing to do with your actual business I'd like to know how far you're willing to go.”

“We are getting close to the end times, when there will be no buying or selling unless you ‘have the mark [of the Beast],'” warned another ominously.

It's worth noting that no one is forcing those who don't want to get vaccinated to get a shot, and that the companies that are offering incentives to those that do are free to run their businesses how they choose. It also seems reasonable to point out that these promotions are more likely than not a savvy way for companies to get their names in some headlines and some bodies in their doors, where customers are likely to plunk down some cash on additional items while they're already there. Far from a sign of the End of Days, what we're really looking at here is simply a clever marketing campaign.

For our part here at RFT: Sign us up. Doughnuts, video games, beer, weed, and I can hug my family for the first time in a year?