Let's Remember That Time Some Birds Pooped on Kings of Leon in St. Louis 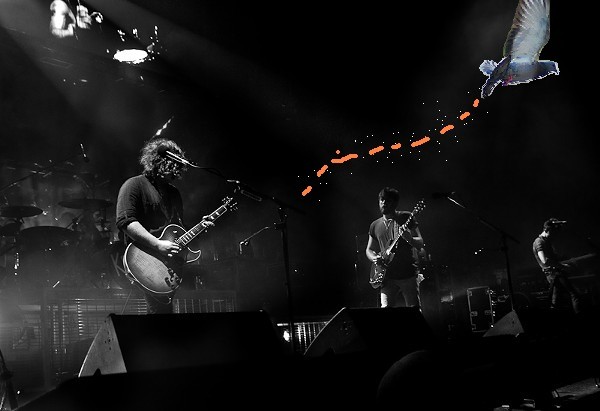 Nashville rock band Kings of Leon has a new album coming out soon, and in keeping, the familial foursome has just this week released a video for the single "Echoing." It's fine! The jangly parts jangle, the poppy parts pop and the low-stakes video has the feel of a live performance, which we're all desperately missing by this point in pandemic life.

But speaking of, all this deadly virus hubbub kept us too distracted last year to properly acknowledge the ten-year anniversary of a true St. Louis milestone: that time the band walked off a St. Louis stage mid-concert after a pigeon (allegedly!) pooped in bassist Jared Followill's mouth. A shameful oversight, that, and one that must be rectified!

So here we go: The now-infamous avian defecation cancellation situation went down on July 23, 2010, as Kings of Leon made a stop at what was then known as Verizon Wireless Amphitheater (now dubbed Hollywood Casino Amphitheatre, but forever etched into the hearts and minds of most St. Louisans as simply "Riverport") with openers the Stills and the Postelles in tow.

There were early indications that the pigeons spotted up in the rafters of the outdoor venue might make trouble for the Followill boys. Specifically, the feathered beasts had already pooped all over members of both the opening bands.

Reviewer Steve Hardy, who was covering the show for RFT at the time of the poopening, noted to then RFT music editor Annie Zaleski that the Postelles dedicated one of the band's songs "to our bassist, who just got shat on."

And Justin Burnett, an attendee at the show who was seated in the front row, told Zaleski that he personally watched the bassist of the Stills get hit with a solid stream of bird shit during their set as well.

"It was so high up you couldn't see it, but it was definitely a bird," Burnett said. "And not to be gross, but when a pigeon shits, it comes out as a long line, and it's very noticeable. We thought it was water at first, and when the opening act commented on being shat on, we knew it was a bird."

The sight of the bassists of both those bands coming off the stage dripping in bird shit was likely a disconcerting one for Kings of Leon — particularly for fellow four-string enthusiast Jared (not enough has been made of the fact that the birds seemed intent on only dropping bombs on bassists on this evening, but it's certainly worthy of note). To their credit, though, when the time came, the band members stepped out onstage and played their hearts out nevertheless. ... for three songs, at least.

The band made it through just "Closer," "Crawl" and "Taper Jean Girl" before walking off the stage in a huff. As the show's entry on Setlist.fm succinctly notes, "Concert ended early due to bird shit."

The house lights came on after a few minutes of confusion, and a staff member took to the stage and announced that the show was over. "Due to concerns over the band's safety, we are canceling the show. Please file out in an orderly fashion," he said.

At first, those in attendance thought the sudden end to the concert was a prank or a hoax, according to Hardy. But as reality set in, there was a great wailing and gnashing of teeth, and enraged Kings of Leon fans booed and began a chant of "bullshit!" — apparently unaware that, actually, it was pigeon shit. According to Hardy, the scene in the parking lot descended into a cacophony of honking and broken bottles as those same disgruntled fans queued up to leave.

Drummer Nathan Followill soon took to Twitter to address the matter. "So sorry St. Louis. We had to bail, pigeons shitting in Jared's mouth. Too unsanitary to continue," he wrote. "Don't take it out on Jared, it's the fucking venue's fault. You may enjoy being shit on but we don't. Sorry for all who traveled many miles."

The fallout was swift. Just after midnight, Livenation issued a statement offering refunds due to the abbreviated set. The following afternoon, a member of the band's management team, Andy Mendelsohn, officially laid the blame on a "pigeon infestation" at the venue, saying he was "surprised they stayed for as many songs as they did."

"Jared was hit several times during the first two songs," Mendelsohn said. "On the third song, when he was hit in the cheek and some of it landed near his mouth, they couldn't deal any longer. It's not only disgusting — it's a toxic health hazard. They really tried to hang in there. We want to apologize to our fans in St. Louis and will come back as soon as we can."

Jared spoke up about the situation in the statement as well.

"We couldn't believe what the Postelles and the Stills looked like after their sets," he said. "We didn't want to cancel the show, so we went for it. We tried to play. It was ridiculous."

A clearcut case, then: The show was stopped short because a bassist-hating bird took a dump in Jared's mouth. Who could blame him for wanting to walk off?

But soon, the rumor mill kicked into high gear.

When Monday rolled around, longtime KSHE DJ Favazz mentioned the incident during his radio show and received a call from a listener who claimed things were not, in fact, as they were being presented. The caller, who asked to remain anonymous and said he didn't want his call to be aired, claimed he was working backstage at the show. He said the culprit was not a discourteous bird — it was alcohol.

"He said that the band got there at 11 o'clock, drank all day — and I don't think I said this on the air — but each of them took an IV to try to sober up," Favazz told Zaleski at the time. "And that they were just wasted. They went out there and just couldn't play, [and] blamed it on the pigeons."

Favazz told Zaleski he had read a similar story on Facebook over the weekend about the band's drinking, and he said that the caller even told him that the person who had posted about it had already been canned by the venue. Kings of Leon's publicist vehemently denied the allegation, telling RFT that the rumor was "absolutely untrue."

And, seemingly, that was that. Kings of Leon came back to Riverport just a couple months later in September, the birds behaved themselves and the show went off without incident. "Pigeongate," as it came to be known in St. Louis circles, became a thing of the past.

Or did it? Fast-forward about a year later to July 29, 2011. Kings of Leon take to the stage at Gexa Energy Pavilion in Dallas, Texas, and manage to make it only 40 minutes into their set before singer/guitarist Caleb Followill, who had been slurring throughout the performance and had mentioned earlier in the set that he'd been drinking, announced that he did not feel well. "I'm going to go backstage and vomit and then play three more songs," he told the crowd.

He wouldn't return. The rest of the band followed him off the stage, and soon Jared reemerged, telling the crowd the show was over.

"We're sorry," he said. "Caleb can't sing. Go ahead and burn our records. We are sorry."

Darryl Smyers, who reviewed the concert for the Dallas Observer, dubbed the performance "one of the worst shows I've ever seen." Within days, the band cancelled the entirety of its remaining U.S. tour dates. "I love our fans so much," Jared wrote on Twitter. "I know you guys aren't stupid. I can't lie. There are problems in our band bigger than not drinking enough Gatorade."

Kings of Leon wouldn't perform again until September 28 in Vancouver. On October 31, the band announced they'd be going on hiatus at the conclusion of their November tour in Australia. The band played only a handful of shows in 2012 and didn't resume a full touring schedule again until the summer of 2013, as its members geared up for the release in September 2013 of the album Mechanical Bull.

"To put it clearly: While we thought their complaints of pigeonshit were pretty bullshit, it turns out the band is just chickenshit — and maybe, also, full of shit," she wrote, adding, "Different brother this time around? Sure. Same story? Definitely. A year later, it looks like the real problem has nothing to do with St. Louis."

Kings of Leon followed up Mechanical Bull with Walls in 2016, then went quiet on the recording front for a few years, though it did continue touring during that time — even making a stop in St. Louis again in July 2014.

Since early January of this year, the band has been teasing new songs from its first new album in years, the upcoming When You See Yourself, to be released on March 5. "Echoing," the song for which a music video was released this week, will be one of the tracks included on that record.

What with the pandemic and all, there are obviously no plans for future stops in St. Louis to support the album at this time. But we do hope they'll come back and see us when things go back to normal again.