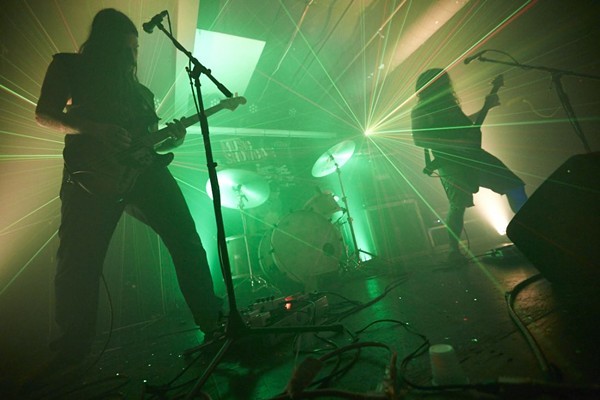 It’s the date that the president of the United States willfully whipped his most rabid supporters into a frothing frenzy of violent insurrection, the date that members of Congress were forced to shelter in place as those same supporters stormed the U.S. Capitol, the date an unhinged mob beat down the doors of the country’s seat of government and accosted anyone unfortunate enough to cross their seditious path.

It also happened to be Kenny Snarzyk’s 42nd birthday — and to hear him tell it, it was a great one.

“It was amazing. I loved every bit of it,” Snarzyk laughs when reached by phone the following afternoon. “I mean I realize a bunch of assholes stormed Congress and scared the shit out of a bunch of senators — great! Awesome. So nobody of consequence was hurt. I mean I’m not stoked that anybody died or anything, but, you know.”

As jarring a take as that might be coming from most United States citizens, it makes some sense coming from Snarzyk. After all, as vocalist/bassist of the St. Louis doom-metal band Fister, he’s penned such bleak anthems as “We All Die Tonight” and “Life Is Short Life Is Shit and Soon It Will Be Over” — it’s not a surprise, then, that he’d find some gallows-humor amusement from the events of the day.

Of course, there were some less complicated moments of joy as well.

“And then fuckin’ Trump got kicked off Twitter, and then he got evicted — got his eviction papers,” Snarzyk adds. “And then I had pizza and fuckin’ cheesecake! It was a great day. Took my Christmas lights down. I really did feel like I was living the American dream.”

Like many Americans entering month eleven of the deadly COVID-19 pandemic, Snarzyk and his Fister bandmates have been laying low. But after an uncharacteristically protracted period of dormancy, the band is gearing up for one of its biggest shows yet — a live-streamed event on January 24 dubbed “Video Death” that will see the group performing on a soundstage with tens of thousands of dollars’ worth of video, sound and lighting equipment, lending an unheard-of level of production value to the trio’s punishing set.

“It’s gonna be pretty nuts,” Snarzyk says. “This will definitely be the biggest production we’ve ever had, and probably ever will. It’s probably like a $50,000 setup. It’s just insane.”

The top-notch equipment comes via St. Louis’ Arch City Audio Visual production company. Largely sidelined since COVID-19 upended the live entertainment industry, the group has recently taken to filming professional-quality livestream shows, including a three-date run with Story of the Year back in October. The company asked Snarzyk if Fister would be interested in using their services in November.

“Chris Keith from Maximum Effort, he works for them and he approached me with — I don’t know when they filmed it, so I guess it was something to do with Story of the Year’s live feed or whatever — but he threw the Fister logo on the video wall and they had these crazy lights and shit going, and he was like, ‘Hey, any interest in doing a livestream? Here’s where I’m working,’ and just sent me this little ten-second video,” Snarzyk recalls. “And he was playing our songs and had our logo up on the thing. And I was like, 'holy shit.' I showed the band dudes, I was like, ‘This looks awesome, but I don’t know.’ We kinda had to be talked into it a little bit.”

The band’s hesitance stems from the fact its members have been taking COVID-19 seriously. Drummer Kirk Gatterer works as a nurse with something of a front-row seat to the pandemic’s toll; guitarist Marcus Newstead regularly wears an N95 mask when doing laundry in his shared building; and Snarzyk has left his Maplewood restaurant, the Crow’s Nest, shuttered since March so as to not contribute to the spread of the illness.

The trio even put their weekly band practice on hold for months. It wasn’t until the largest practice space at Encapsulated Studios — one the band had been eyeing for years — became available in June that the group’s members even occupied the same room together, and that was just to move their equipment. It was September or so before they finally got together to play their instruments, Snarzyk says.

“It’s not perfect — me and Marcus are probably about four feet away from each other, and we’re about six feet from Kirk,” Snarzyk explains of the larger room. “I mean, it’s still — we’re indoors, we’re in a room. But we’re leaving the masks on, and so far so good.”

Snarzyk says that the members of the band have not seen each other’s actual faces outside of a Zoom call since the pandemic began. That’ll change on Sunday for the livestream, when the band will perform without masks.

“Which is a little weird to me,” Snarzyk says. “But we’re gonna get tested right before, and that soundstage is a lot bigger — it’s a bigass warehouse. So everybody in the crew is gonna have masks on, we’re getting tested, and we’ll be spread out to where it’ll be practically outside, as far as the ventilation and the size of the room goes. There’s still obviously a little bit of risk involved, but I’m fairly comfortable with it. And I've been kinda closer to the — I wouldn’t say ‘paranoid’ side of things, but I’ve been very safe. I’ve got some immunocompromised people that I’m close to, so I try not to kill them.”

The main reason the band’s members are entertaining the idea of a livestream at all is due to the unprecedented opportunity presented to them by Arch City Audio Visual. The arrangement between ACAV and Fister is a wholly collaborative one; the production company is not charging Fister for its services, instead proposing a 50/50 split from ticket sales. The members of Fister, knowing that many of those who work for the company are largely unemployed, have since had special merch designed for the event by local illustrator Lauren Gornik, for which they’ll split half the profits with ACAV as well.

“There’s a horror movie from the '80s called The Video Dead, and we just aped the artwork on it really hard, because it’s got such a really cool fucking sleeve,” Snarzyk says. “I have the VHS copy of it and it’s just got really awesome artwork. The movie itself isn’t very good. It’s pretty funny, but it’s no Dawn of the Dead or anything.”

Outside of the livestreamed show, Fister has no overarching plans for the coming months. Its members have been slowly writing new material — Snarzyk and Newstead each have small recording setups at their homes that they use to record and trade riffs — and the band has some split releases on the horizon. But aside from that all is uncharacteristically quiet. That’s partially by design, but naturally, COVID-19 plays a factor as well.

“At the end of our last tour in 2019 — that was November — we were like, ‘Hey let's take it easy next year and we’ll come back in 2021 and we’ll do some big stuff,’” Snarzyk says. “‘We’ll play a couple local shows, but let’s not worry about touring.’ My restaurant was getting busy and we all had some personal stuff so we were like, ‘Let’s just kinda, not take the year off, but let’s take it easy.’

“And then COVID happened,” he says with that gallows-humor laugh. “So maybe that’s our fault.”