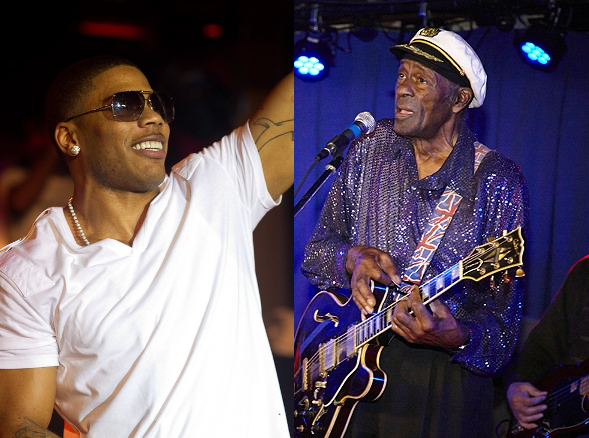 Though 2020 has seen the utter decimation of the live entertainment industry, with COVID-19 restrictions sidelining musicians around the world who would normally spend their days touring, this year has been a remarkably busy one for St. Louis' own Nelly.

He's made it all the way to the finals in this season's Dancing With the Stars competition (even doing his best Ozzie Smith impression with a perfectly executed backflip during one outing), celebrated the twentieth anniversary of his debut album Country Grammar, and is slated to perform at the American Music Awards on November 22.

Now it's been announced that the rapper has been cast to portray fellow St. Louis music legend Chuck Berry in the upcoming Buddy Holly biopic Clear Lake, to be directed by Bruce Beresford (Driving Miss Daisy, Double Jeopardy).

Variety broke the news yesterday that Nelly will perform alongside Ruairi O’Connor, who was announced last month for the role of Holly, as well as Colin Hanks, who will portray Holly's manager Norman Petty, and Diane Guerrero who will portray his wife, Maria Elena Holly.

The film is named after the site in Iowa where Buddy Holly, Ritchie Valens, and "The Big Bopper" J. P. Richardson died in a plane crash in 1959, an event now commonly known as "the day the music died" thanks to Don McLean's song "American Pie." According to Variety, the film "tells the story of how Holly and other famous musicians of the late 1950s gave birth to rock & roll while changing the trajectory of civil rights in America."

Clear Lake will not be Nelly's first foray into acting. The rapper memorably performed as Megget in the 2005 reboot of The Longest Yard, and also starred as Terrence Davis in a four-episode arc on CSI: New York in 2008 and 2009.

But even without those prior credits, you gotta think this one would be easy for Nelly. Chuck Berry's work is foundational to the very DNA of music in St. Louis, a world Nelly has deftly navigated to the upper echelons of the industry. He even memorably performed with Berry for a free concert back in 2010. It's only natural that he'll be able to tap into their shared St. Louis success stories and channel his inner Berry.

At the very least, if those Dancing With the Stars appearances are to be believed, he'll have no trouble at all with the duckwalk.