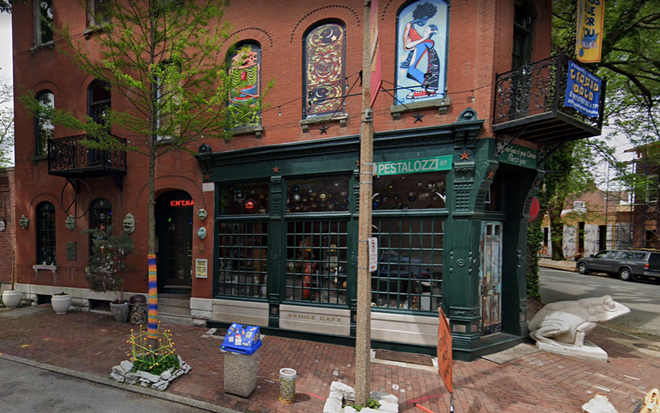 Beloved Benton Park mainstay Venice Cafe (1903 Pestalozzi Street, 314-772-5994) has temporarily closed its doors as of today, with an eye toward reopening in the spring.

The eclectic bar and performance space made the announcement today on social media.

"Officially closed for winter. Thanks for the great times, all. See you after hibernation," reads a post on the bar's Facebook and Instagram accounts, accompanied by a photo of a sign that says, "We will be closed until spring 2021. Be safe, love each other, and may the god of your choice bless you."

The news isn't exactly a surprise. In late September, staff announced on Facebook that the business would be closing for the winter months. Its spacious patio served it well throughout the COVID-19 crisis, allowing the bar to play host to a variety of musical acts while offering plenty of distance between patrons. But with temperatures dropping, the bar's owner made the decision to shut down for winter.

"Sorry folks, we have no idea what late fall and winter will be like but we do know that the skipper has decided not to open for winter and, in his opinion, winter starts October 1st," reads a post from September 27. "Our staff is ready to leap to action on the event of a warm evening or three but, as it stands right now, Venice will be mostly closed October-April."

The bar managed to make it nearly three weeks into October with that approach, opening only when the weather was favorable — but now they say the doors will stay shut until spring.

Venice Cafe isn't the first in the area to try this approach during these unprecedented times. In early October, Bogart's Smokehouse and Southern, two eateries in the Pappy's Smokehouse family of restaurants, both closed their doors for the colder months as well.

"We have been managing our financials very closely, and based on year-to-date numbers and projections as we move into our slowest season, we believe we'll be in a better position to reopen Bogart's and Southern in March/April 2021 if we temporarily close them this fall and winter," co-founder John Matthews said at the time.

It's reasonable to assume this could be a trend going forward, as bars and restaurants continue to see less business than they would in pre-pandemic times and cold weather drives customers into a less-crowded interior setting than they are used to. Both the city and county have set limits on businesses, allowing only 50 percent of their usual capacity, in an effort to slow the spread of coronavirus — it's easy to see how that could be a financial hardship on an already hamstrung industry.

But to state the obvious: Better a temporary closure than a permanent one. We'll see you all in April.