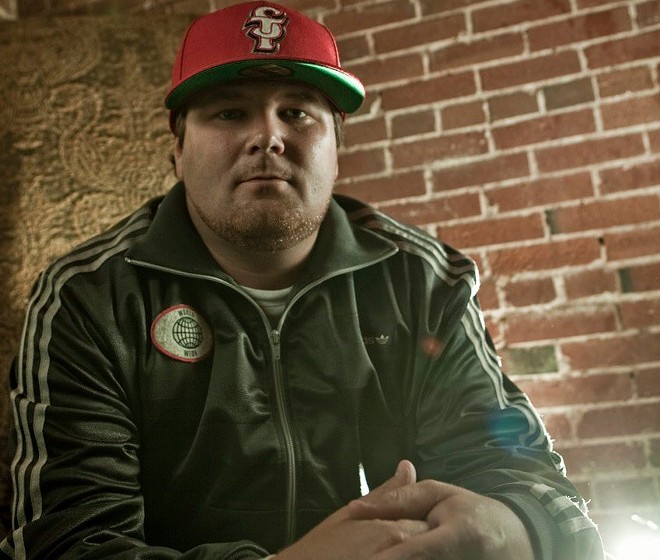 The St. Louis hip-hop scene lost a true-to-life legend this past week.

Since the early ‘90s, Wes “DJ Solo” Allmond has been a pioneer, tastemaker, deal broker, promoter, booking agent, producer and DJ. But the best thing about Wes was he loved people and he loved music. He was always there for my band, Midwest Avengers, and supported us 110 percent when we crossed over into electronic music/raves. Though we worked for rival promotional companies he always shared connections, because he said it was about St. Louis competing on the national level for shows and sponsorships.

One of my best memories of him is from my apartment on Delmar in ‘93. He showed up with the new Tribe Called Quest album, Midnight Marauders, on vinyl while we were coming up with a name for this graffiti jam we were putting on — now called Paint Louis. Years later we were organizing Paint Louis ’98 and Wes said, “I can get Fat Joe and Big Pun to come.” We said, “Yeah right.”

But sure enough the day came, and there I was at Paint Louis, picking up trash, when I saw two big Latino dudes across the street spray-painting on private property. I ran over to stop them and to my amazement, it was Fat Joe and Big Pun. Wes came through again!

I’m tempted to use this space to tell a bunch of stories about Wes — I have plenty — but I think it’s better for his friends and family to talk about him in remembrance.

DJ Alejan, co-founder of Blu Concepts, says, “Wes began his involvement with KDHX as a DJ for Sylvester the Cat’s show called The Beat in the ‘90s. By 1998, Wes was the utility man in the early days of The Science. He worked the sound board at the radio station while Fly D-Ex and I hosted the show live from Blueberry Hill. Later, he co-led with Fly D-Ex, but his involvement was always behind the scenes, curating DJs to spin and coordinating artist appearances. He was the co-founder of Blu Concept Entertainment, a company that marketed and promoted national hip-hop and R&B artists. The company was bought by Ch’rewd Marketing in 2001. Wes took on the role of general manager and led all operations in St. Louis until 2011 when he founded his own firm, Promoworks. He was highly regarded by colleagues in the national music marketing and promotions business.”

"You can take the hustler out of STL. But you can't take STL out of the hustler." Oshe Galyon, founder of Street Kingz Promotions and Marketing, says that was one of Wes’ favorite sayings. “And Wes meant it,” Galyon says. “I got a chance to get to know him, become brothers, and work with him. Wes was one of the hardest workers I know. As the tour manager for Do or Die, he worked so hard that he came home with no voice and went into the hospital with walking pneumonia. He was still booking shows and hooking DJs up from his hospital bed.

“Through Ch’rewd, we brought the Godfather of hip hop, DJ Kool Herc, DJ Premier, DJ Babu, Ali Shaheed Muhammad, Phife Dawg, Tha Alkaholiks, Dialated Peoples, Show Biz and AG, Slick Rick, Dougie Fresh, the Roots, Busta Rhymes and others,” he continues. “We took MC Eiht to the east side and brought a little known R&B Singer named John Legend to Blueberry Hill’s Duck Room two months before he won his first Grammy. We lost hella money on that show. Wes worked with International stars, but his focus was on the local scene. The most important thing was the legacy of DJs that came through The Science in the late ‘90s to early 2000s. Wes didn’t just consider them DJs, he considered them family. Some of those DJs included Chilly C, A-Flex, Alejan, B-Money, Crucial, Agile-1, Anisto, Sinamin, Stan da Man, Needles, Fly D-Ex, K-Nine, Trog, Mike 2600, Trackstar, the Legendary Charlie Chan and more. His impact on the local underground hip-hop scene was immeasurable and will resonate for years to come.”

DJ Trackstar, DJ for Run the Jewels, says, “Wes has been the biggest influence on my DJ career through the music he shared with me, either as a fan or as a promoter. One of the most exciting things I could do in the mid-2000s was make my regular pilgrimage to Ch’rewd and find out what free vinyl awaited me. He influenced how I approach the music business and life. I learned so much. I met and built with some of my most important partners to this day at Ch’rewd. He created a clubhouse atmosphere that made you want to hang out and soak up vibes and info. He taught us directly — and by setting an example — about working hard, treating people fairly, being on top of your business, providing opportunities to other people trying to come up in the scene, staying positive. His focus, generosity, thoughtfulness and love for the game live on through me and so many others in STL and beyond. His google chat away message for years was ‘I’m almost the best.’ No Wes, you were the best.”

Alex Pierson, a.k.a. DJ A-Flex and Wes’ best friend, says, “I was talking to Solo’s old roommate Jeremy Von Nida last night and something occurred to me: The reason we all knew each other was because of our mutual love of music. Most of us have been involved in the music industry for twenty-plus years. For everyone who is feeling lost, I believe he would want us to make music, or do what brought us together. Do it bigger and better than you’ve ever done it before. That project or goal that you’re waiting to start or finish, get after it. I imagine he’s up there keeping an eye on things, and if he sees everyone being creative, doing what they love, he’ll be smiling down on us. Solo had the ability to recognize potential in others. He saw it in me and I’d bet he saw it in you. He wanted to help you recognize and pursue your dream, and showed us that you can become successful being selfless and helping others. I believe he would want us to live every day to the fullest and not take a single moment for granted. I had the honor of calling him my best friend and brother, and I wouldn’t be the man I am today if it wasn’t for Wes.”

“Wes met his anchor, partner, the very love of his life, Sarah (Poncez) Allmond, and they wed on June 1, 2012. A beautiful union was created and led to the births of their beloved daughters, Danielle Rebecca and Alexa Anne. Wes was preceded in death by his mother, Rebecca Corley. Proud to call him theirs, Wes is survived by an army of family and friends. This includes, but is not limited to, his father, Jimmy Allmond; in-laws Lynne and Bill Poncez; siblings-in-law Jevon (Tricia) Poncez and Juliet (Jason) Greene; nieces and nephews Griffin and Sidney Poncez, Vanessa and Charlie Greene. And of course, his brother and best friend, Alex Pierson. None will miss him more than Sarah, Danielle and Alexa.”

The family invites you to celebrate Wes’ life on Saturday, September 19, 2020 at Bopp Chapel (10610 Manchester Road, Kirkwood) from 10 a.m. to 4 p.m. Due to COVID-19 restrictions, a maximum of 50 visitors at a time will be admitted. We kindly ask that you reserve your time by RSVPing here. The visitation will be live-streamed if you are unable to attend in person and information will be posted Friday on Wes’ Facebook page.

A GoFundMe page has been established to help the family — you can donate to that here.