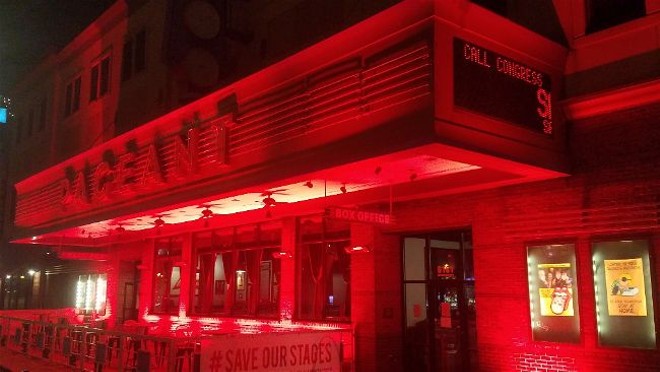 This past Tuesday, observant St. Louisans were treated to an unusual sight as many of the city's music and entertainment venues, both large and small, illuminated their buildings in bright red light throughout the evening.

The coordinated effort was part of a nationwide movement to draw attention to the dire plight of those who work in the live entertainment industry, who have found themselves out of work for months as COVID-19 continues to wreak havoc across the country and world. St. Louis venues including the Fox Theatre, Delmar Hall, the Dark Room, the Grandel, Red Flag, the Kranzberg Arts Center, .Zack, Powell Hall, the Stifel Theatre and the Enterprise Center all participated in the effort, among many others locally and nationally.

The campaign was dubbed "Red Alert Restart," with a hashtag to match, and its goal was to raise awareness about the bipartisan Reviving the Economy Sustainably Towards a Recovery in Twenty-twenty (RESTART) Act. The bill was first introduced in May by U.S. senators Michael Bennet (D-CO) and Todd Young (R-IN).

According to a press release from Bennet's office upon the announcement of the bill, its aim is to "support the small- and mid-sized businesses most affected by the Coronavirus Disease 2019 (COVID-19) crisis," including "restaurants, gyms, hotels, retailers, and other businesses." Specifically, the bill would offer up to 90 percent forgiveness on loans to those who have suffered high revenue losses due to the pandemic, and it won't penalize companies with part-time employees. Additionally, it offers grants to eligible businesses equal to 45 percent of gross revenue from 2019, capping out at $12 million.

As it happens, many of the businesses in the live entertainment industry fall squarely in that category of eligibility. As Pageant and Delmar Hall co-owner Pat Hagin explains to the RFT, the RESTART Act would prove far more helpful for those in the struggling industry than the Paycheck Protection Program (PPP) loans that were disbursed at the start of the coronavirus crisis.

"It's a better fit than the previous round," Hagin says. "As an example, with the PPP where you're required to spend a large percent of it on labor, we've all been completely shut down — at least in the case of the Pageant, Delmar Hall and the Duck Room — since March 10th, and with no income. So it's not really a matter of cutting back on labor or anything like that; it's like, there is nothing coming in."

Simply put, with so many of the venues still closed entirely, there isn't even any work to do for which employees could be paid. Hagin says that, of the 95 people employed by his venues, only five are still collecting a paycheck — and those checks are at a reduced rate.

"So that gives you an idea of how tight things are," Hagin says.

The number of people affected by the lack of work in the live entertainment industry is huge, extending from those who sell and scan your tickets to those working security to promoters, talent buyers, lighting and sound professionals, booking agents, musicians, actors and on and on — around 5 million people across the nation, according to some estimates.

Michael Beckman, the business manager of the Local 6 St. Louis Stagehands union, says he represents about 140 full-time members who specialize in entertainment lighting, audio, video, scenic, rigging and personnel management for live events. That number typically swells to between 200 and 250 during the busy summer and fall seasons. But almost all of them are not working at present and haven't since the pandemic began. 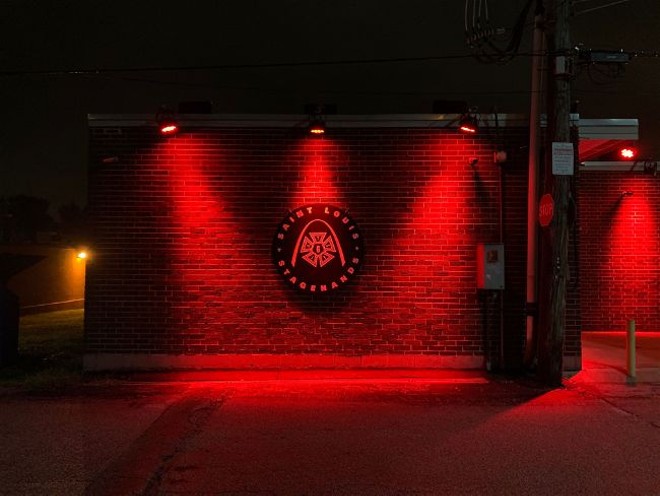 "We're still out of work," Beckman says. "We're lucky if we have eight to ten guys working a week at best."

Beckman says members have been forced to take out personal loans and tap into their retirement savings just to keep afloat. He says that many of them have been unemployed since March. For him, some form of government assistance is the only way for his people to avoid economic devastation — and that means supporting the RESTART Act.

"Right now I feel like our elected officials have failed us," he says. "I got people that are worried about their mortgage. They're at home right now, their kids are at home because of this COVID. My guys are struggling. My guys and women are struggling."

Chris Hansen, executive director of the Kranzberg Arts Foundation, which operates several of the venues that went red on Tuesday (including the Dark Room, the Grandel, .Zack, the Kranzberg Arts Center and more) says that even though their establishments operate a bit differently than some of the other participating venues, they still felt it was important to draw attention to the issues the industry is facing. All of the Kranzberg-affiliated stages remain dark as well.

"Our spaces are inherently different in how they serve — we're not a competitive commercial-based entertainment venue, so our rooms work a little differently," he explains. "We don't buy touring acts in that same way, and we don't compete with the likes of Pat Hagin or Off Broadway and things of that nature. We're standing in solidarity with this effort because we are part of the broader industry widely and we've seen firsthand the devastation of the gig worker, our colleagues and other venues and production companies that we work with."

Hansen says Beckman and Hagin each reached out to him about having Kranzberg-affiliated venues participate in the Red Alert Restart campaign. He says he was happy to do his part to help.

"From what I've heard, up to 90 percent of some of the smaller venues and production houses could go out of business next year," Hansen says. "So it is really critical, and it's often an industry that doesn't get enough attention."

As of press time, a total of 54 members of Congress support the bill, with a healthy bipartisan split of 30 Democrats, 23 Republicans and one Independent. In the bi-state area, senators Tammy Duckworth (D-IL), Dick Durbin (D-IL) and Roy Blunt (R-MO) have all signed on as co-sponsors. Josh Hawley (R-MO) remains a holdout.

To show your support for the RESTART Act, visit saveourstages.com and fill out the short form at the bottom to be sent to your elected representatives. The form identifies those officials automatically, and filling it out takes less than five minutes.

The senate gets back into session next week, and they're expected to continue to hammer through negotiations for a COVID-19 stimulus package. Supporters of the RESTART Act hope that it will be included in that legislation.

"We obviously want to thank the senators who endorse it and encourage them to stay firm to their commitment to it, because god knows what can happen once they start to blend bills," Hagin says. "And also to ask Josh Hawley to also get involved.

"It's a bi-partisan effort," he adds. "Hopefully this can get done."