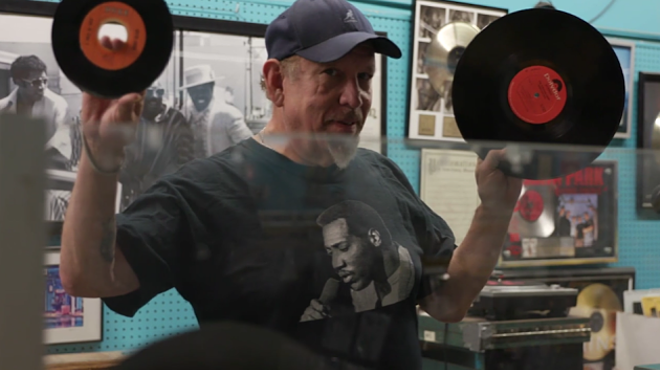 Vintage Vinyl, a St. Louis music institution for some 40 years — one that is frequently ranked as one of the best record stores in the entire country — is ready for its big premiere on the small screen.

Papa Ray's Vintage Vinyl Roadshow, a project years in the making, will be making its television debut tonight on the Nine Network. As the RFT reported back in February 2019, the show is envisioned as a documentary focused on the independent record store as a cultural entity, with Vintage Vinyl owner Tom "Papa" Ray playing host.

Ray and his team, which includes his wife Laura, who serves alongside Ray as a co-executive producer, first traveled to Santa Monica with the show's producer, Brad Hodge, to pitch it in November 2018.

"The pitch I was giving was this: What does it mean to be an independent urban record store in a city that is one of the great foundation cities of music in the world — we gave the world ragtime, jazz, blues, soul, rock & roll, gospel — and yet somehow is always in the top-ten list of cities to avoid?" Ray told us at that time. "Especially after Ferguson, we are now branded as the Selma, Alabama, of the 21st century. So what does it mean to be that rarest of things in a city like that: a racial neutral zone? And what is the connection of music to culture, culture to music?"

If all goes well with the premiere of the first episode, Ray and his team hope to continue the show as an ongoing docu-series of sorts. According to a November 19 post on the show's Facebook page, Ray and the other producers already have several episodes in the can.

In this first episode, the show will focus specifically on St. Louis, and Ray's own shop, of course — as Ray refers to it in a recent social media post, the pilot is the group's "love-letter to St. Louis and the healing powers of music." But potential future episodes would see Ray traveling the world and visiting other well-known record stores and music communities.

"The producer's concept is, after three or four episodes about St. Louis — which I expect to have a heavy social and racial context to it, because that's reality — then take it on the road, go to all these towns that have great independent record stores," Ray told RFT when we first broke the news about the effort. "And this is not my words, this is the producer's words: 'I really want to have you out there as the Anthony Bourdain of vinyl.' I said, 'Really?' But I thought about it for a while and I said, 'Well, there's two shows on TV about fucking cupcakes. Why not?'"

Why not, indeed. Papa Ray's Vintage Vinyl Roadshow is set to premiere tonight at 8 p.m. on September 3. Encore performances will air on September 5 at 6:30 p.m. and September 8 at 8 p.m.

Watch the trailer for yourself below: