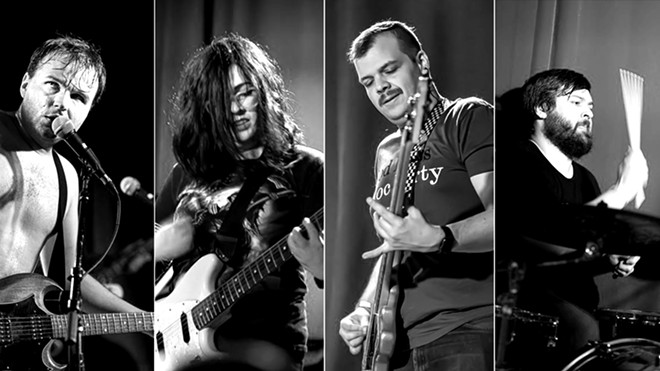 At the start of the year, Adrian Barnello and his bandmates in Fight Back Mountain had big plans, with a new album to be released and a tour in the works. But then, as with all plans in 2020, the life-draining, hope-crushing nightmare that is COVID-19 demolished their dreams.

“We had to cancel a ton of shows; we had a show we were gonna play with the band Pears, the Fat Wreck band, that was probably going to be our biggest show to date,” Barnello says. “That got axed completely. We also had to cancel some other shows. We had to take two or three months off of practicing — we didn’t practice at all when the lockdown order was in place.”

On top of the canceled shows and missed practices, coronavirus put the kibosh on the band’s most ambitious plans for 2020: the release of its sophomore LP, with a cross-country tour to match.

“We were gonna put out our full-length album this year, but we decided to push it back to next year because we wouldn’t be able to sell albums or play any shows,” Barnello explains. “We’re not going to play shows until it’s a real one. I wouldn’t be comfortable playing a show at all for the rest of this year. COVID definitely took a wrecking ball to our plans this year — that would be putting it lightly. We were supposed to go on tour this month, which obviously is not happening. It was on the books, we were gonna announce it in April. Postponed album, canceled tour, canceled shows — we got it pretty much as bad as you could get for a band.”

For a band that was years in the making, it’s been a series of setbacks in what had promised to be a big year. Though Fight Back Mountain started in 2017 when band members Adrian Barnello (vocals and guitar), Anjelica Aquilino (rhythm guitar and lyricist) and Devin Dessieux (drums) decided they needed something new, it wasn’t their first time playing together.

“Me, Devin and Anjelica, we all used to go to a rock & roll summer camp thing when we were in high school. It’s pretty dorky but it was pretty fun, it was called Camp Jam,” Barnello explains. “We were in a band at this summer camp, this is in like 2007, our band captain was Mario from a bunch of STL bands like the Pubes and Sex Robots; he was our band leader guy. He was our camp counselor, believe it or not. We were like, ‘the punk rock group.’”

Ten years later they joined up again to form Fight Back Mountain and decided to evolve past being just “the punk rock group” and make a move toward a more rock & roll sound. To file them away as another KSHE Klassic-style rock band would be a mistake though — a heavy dose of that foundational punk influence still shines through.

But while Fugazi notably leaned heavily on politics to power its lyrics, you won’t hear much of that from Fight Back Mountain. Although Barnello was an elected delegate for Bernie Sanders in St. Louis’ 24th Ward, currently phone banks for congressional candidate Cori Bush and works with the campaign for state senate hopeful Doug Beck, the band tries to keep their political viewpoints out of their music.

“I've always been involved in politics; I try as best as I can not to sing about it too much,” Barnello says. “I don't want anyone to not be able to enjoy the band because of a difference of opinion. We don't have any tolerance for racism or stuff like that, but I try not to let the political stuff bleed into the lyrics too much — although it does happen on occasion.”

One such occasion would be the band’s March single “Uncle Amero” (available on Bandcamp and Spotify), which slips through the cracks and lands firmly in political territory. “A corporatist, a realist/the Party and Nate Silver think that you're the shit/Won't beat far-right with mediocrity/We're snatching defeat from the jaws of victory,” is certainly as political as anything you’re likely to hear from any artist this election year.

But that’s the exception rather than the rule. Most of the band’s songs delve into deeper issues ranging from depression to grief to sexism. The band’s lyric-writing process is unique, as most lyrics are written by Aquilino for Barnello to sing, and in fact the band was formed around Aquilino’s writings.

“In 2017 Anjelica was writing a bunch of songs because her therapist told her to try to write some lyrics to try to deal with what she was going through, so she wrote a bunch of them,” Barnello says. “Me and Devin, our old band the Mondales had just broken up and we were looking for something to do. So we were like, ‘Hey, let's take these lyrics that Anjelica wrote — they're pretty good — so let's take them and make a band. Eventually I coerced Andy [Kohnen] into being in our band; we didn’t have a bass player until then.”

When asked if it’s strange to sing someone else’s lyrics, Barnello says it’s in fact quite the opposite.

“I actually like it more. I’m kinda lousy at writing lyrics,” he says. “It sort of allows me to not be embarrassed because a lot of our songs are really personal, and if it was my personal issues that I was going through it might be kind of hard showing that to people, but I don't really get that because it’s not mine. If it was Anjelica singing it she might be more likely to get stage fright because you’re putting yourself out there to the world. This way I'm kind of the intermediary.”

Even with all that 2020 has rained down upon them, Fight Back Mountain is hopeful about the future and plans to record the second half of its full-length album, tentatively titled Lavender Sky, in October. The band’s latest single, also titled “Lavender Sky” was released on July 17 and is currently available on Spotify, Bandcamp, and Apple Music.