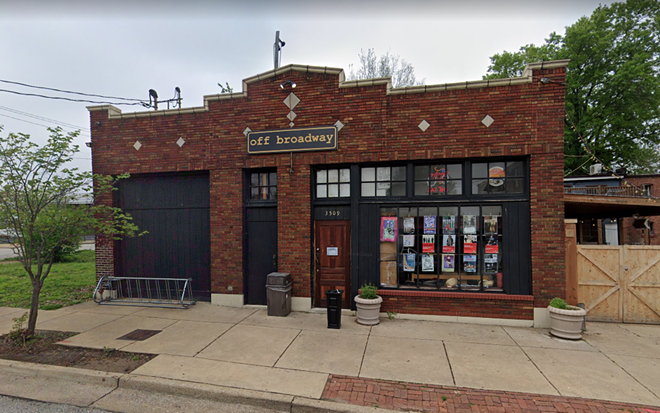 As music venues across the nation remain shuttered due to efforts meant to slow the spread of coronavirus, many, much like their restaurant and bar counterparts, have turned to curbside service in order to stay afloat in these unprecedentedly turbulent times.

In keeping, Off Broadway is selling a range of options from its bar, including everything from Stag and Busch tallboys to offerings from local breweries including Schlafly and 4 Hands to bottles of straight booze, in addition to a small selection of wine.

The full menu can be found here. Pickup is available Friday through Sunday from 4 p.m. to 8 p.m. — once your order is placed, Off Broadway staff will reach out to let you know when it will be ready for pickup. They'll be running the operation through the box office window at the courtyard entrance. Any questions about the process should be directed to promos@offbroadwaystl.com.

Music venues were one of the first — and hardest hit — casualties of COVID-19 lockdown orders, and remain one of the industries with the bleakest overall outlook. Promoters, talent buyers and booking agents across the country have increasingly thrown in the towel on 2020 altogether, and those that choose to soldier on this year are looking at potentially cost-prohibitive rules detrimental to doing business, including reduced capacities and the need to hire additional staff to enact more stringent cleaning procedures. In other words, less income from tickets, more expenses for safety measures.

NPR reported last week that as many as 90 percent of independent music venues could be forced to shutter in the coming months unless they recieve some sort of government funding to survive the crisis.

That's led to the establishment of an advocacy group for venue owners and promoters called the National Independent Venue Association, or NIVA, that exists solely to lobby for money from the government to help the live music industry weather the storm.

Many local clubs and promoters count themselves as members of the organization, including Off Broadway and Mike Judy, as well as the Sheldon Concert Hall, Fubar, Old Rock house and more. To show your support to those efforts, you can sign a "Save Our Stages" petition encouraging the government to issue emergency funds.

A cheers to Off Broadway, and to all of St. Louis' embattled music venues.