HOLLY RAVAZZOLO The stage at Delmar Hall and other St. Louis venues will be empty for a while. 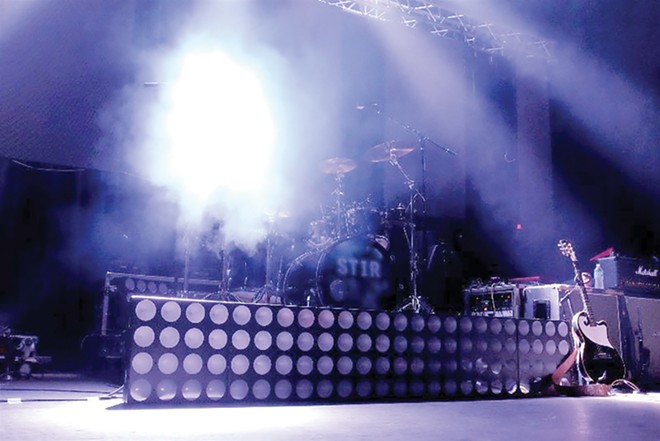 Last week, as national headlines hit the internet announcing that Missouri's reopening plan would allow concerts to go on with no restrictions on crowd size, Mike Judy's inbox began filling up with emails from eager booking agents.

"Missouri Governor Says Concerts Can Resume Monday," proclaimed Billboard's headline. The accompanying story went on to explain that a representative from Missouri's Department of Health and Senior Services "clarified for Billboard that concerts do not have to adhere to the same occupancy limitations as retail businesses, but event organizers are expected to keep concertgoers six feet or more apart to limit the spread of the novel coronavirus."

But for Judy, an independent promoter who works with many of the venues in St. Louis (where stay-at-home orders and limits on crowd size remain in place) things just aren't as simple as that. In other words, he had to let a lot of agents down.

"I told them that, sure, if we wanted to get a couple thousand acres in the middle of Missouri somewhere and line everyone up with a six-foot box and have everyone wear gloves and masks, yeah, we can probably do that," Judy says. "If you wanna do a 10,000-person festival or something, absolutely. Go for it. We just can't do it in Kansas City or St. Louis or Columbia or Springfield. Or anywhere normal. It's just not feasible."

Put another way: "If you wanted to put together an ill-fated event in the middle of the state somewhere rural, then yeah, sure," he says. "But that's obviously not realistic, of course."

It may come as an unwelcome dose of reality for the St. Louisans that are itching to see some live music again, but the logistics of actually putting on shows during the ongoing coronavirus crisis are fairly prohibitive. Arkansas, for example, recently made headlines for a "socially distant" concert with country-rock artist Travis McCready set to take place on May 15 in Fort Smith — the first of its kind in the nation. But due to the precautions that will be in place, the concert going experience will look much different than the one we're all used to.

The venue will be open at only 20 percent capacity, for one. Tickets for "fan pods" can be purchased in groups of two to twelve seats, and those groups will be spaced six feet apart. Everyone at the show, from employees to attendees, will be required to wear masks. There will also be restrictions on how many people can be in the bathrooms at the same time, and fog sprayers will be used before and after the concert.

While the state of Missouri itself hasn't mandated such measures, it's a safe bet that urban centers like St. Louis and Kansas City will announce similar restrictions when they finally allow concerts to go on. At the least, venues will likely need to employ such measures simply to keep concert attendees and employees safe.

On the business side, that makes things tricky, Judy says.

"There's not a lot of incentive to try to open up a building at a quarter cap or whatever would be determined," McClimans says. "The costs for us, for utilities and tech crew and rent and all that stuff — that doesn't just go away. So if we can only open to a quarter of it and our expenses are staying reasonably close to the same, from the business perspective, opening up at that level doesn't seem to make a lot of sense either."

There's also the simple fact that social distancing at a concert would be incredibly hard to police — especially at smaller venues.

"I mean let's be real: Expecting 340 drunks at a Sick of It All show to social distance is an exercise in futility, I would think," he says.

Reduced capacity at shows would make things difficult from a ticketing standpoint as well. Many of the shows that were rescheduled have already sold out, or at the least sold more tickets than the number of people likely to be allowed in the building. This presents a unique challenge: How do you decide who gets to come in?

Asked when he thinks the venues he works for will be able to host concerts again, McClimans is blunt.

"We don't foresee anything with patrons occurring for the foreseeable future," he says. "I don't think that there will be shows in our three venues anytime soon."

Part of that, he says, is that he believes there simply isn't enough appetite in the public at large to gather together in a crowd anytime soon. He doesn't expect that appetite to return until there's more widespread testing and effective treatment options for COVID-19. Until that happens, McClimans says he expects things will stay on hold.

Judy is similarly uncertain as to when he'll be able to book shows again.

"Say they come back and they ease restrictions and they begin shows in St. Louis in early summer or so — I'm not gonna," Judy says. "Especially since the vast majority of what I do are national acts, I wouldn't be looking to put anything on really. Certainly not in spring, likely not in summer either.

"What this really all comes down to is whatever that timeline may be where people feel safe and where we can get back to a level of normalcy," he continues. "And I do believe that once that level is hit I think everything — I'm not gonna say things snap back to normal, but I'm not seeing this going on for years and years. I don't think the new normal is an indefinite new normal, if that makes sense."

Though he says many acts are now rescheduling their tours out as far as early 2021, in his mind, the absolute best-case scenario would be for shows to resume in late summer.

"I could see a scenario where things improve at an accelerated rate, and maybe we're sitting here in late summer and it looks like it's OK to do national tours at a realistic level," Judy says. "Perhaps not full level by that point, but at a realistic point where it does make logistical sense for everyone, and financial sense, then maybe a couple smaller tours start going out. Not the anniversary tours, not the album release tours, but some standard headlining tours. That would be, in my opinion, the best-case scenario."

"Hopefully we will all be able to do that Sick of It All show in August and act like fucking assholes," he laughs.