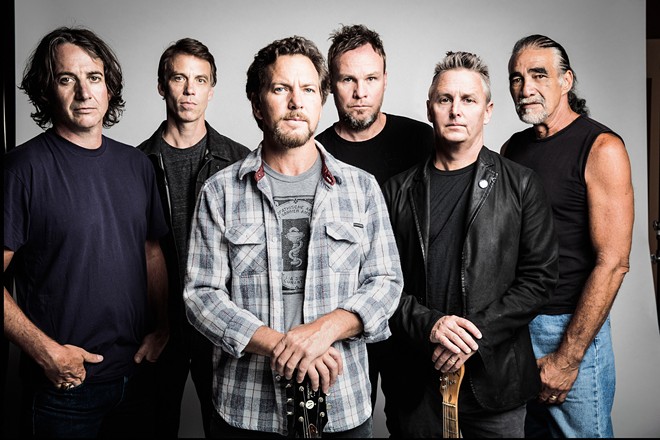 In a preview of what will most likely be a trend in coming weeks, multiple St. Louis-area concerts have been canceled over concerns relating to the coronavirus, which the World Health Organization officially upgraded to a pandemic on Wednesday afternoon.

Pearl Jam, the Zac Brown Band and Anna Burch have all announced they will not be going forward with their planned tours this spring. Pearl Jam, which is based in Seattle, a hotspot for coronavirus at present, was the first to cancel its tour, and with it its April 4 St. Louis date.

"As residents of the city of Seattle, we’ve been hit hard and have witnessed firsthand how quickly these disastrous situations can escalate," the band writes in a statement. "Our kids’ schools have closed along with universities and businesses. It’s been brutal and it’s gonna get worse before it gets better."

It continues, in part: So it is with deep frustration and regret that we are forced to make this most unfortunate of announcements. This scheduled first leg of our PJ/Gigaton tour will need to be postponed and shows rescheduled for a later date."

Atlanta's Zac Brown Band soon followed suit, canceling the spring dates of its "The Owl" tour, including a scheduled stop in St. Louis on March 12.

"Out of caution and due to increasing public health concerns, Zac Brown Band is postponing the spring 2020 leg of 'The Owl Tour,' the band writes in a statement. "This was an extremely difficult decision, but the well-being of our fans is always our top priority. Rescheduled dates for all spring shows (through Nashville on April 25) will be announced soon."

Pearl Jam and Zac Brown Band were both set to happen at the Enterprise Center, a large venue that would see big crowds for both events. But it's not just the big ones that are being canceled. Detroit's Anna Burch was scheduled to perform at Blueberry Hill's Duck Room on March 15, but Burch canceled her whole tour after it was announced that SXSW would not go forward this year.

"Hey guys, I'm really so bummed about this but I've decided we won't be playing the shows we had booked to get us down and back from SXSW after the festival's cancellation," Burch writes in a statement. "Tickets to all March shows will be refunded and I hope you'll understand."

SXSW's high profile cancellation was followed up by an announcement that Coachella would be rescheduled this year due to coronavirus concerns, meaning that two of the country's largest music festivals have been felled by the virus. There are also concerns that SXSW's cancellation may cost so much that the festival will be unable to return next year.

St. Louis, meanwhile, is seeing a slew of cancellations of other large, non-music events as well. For a full tally of those cancelled events, click here.