Fans of craft cocktails and vinyl have a new destination that combines both interests under one very stylish roof.

On Thursday, February 20, vinyl listening room and lounge Takashima Records (4095 Chouteau Avenue) will debut in the Grove. Located inside the Chroma building at the intersection of Chouteau Avenue and South Sarah Street, Takashima Records is the brainchild of owner Sean Baltzell and the ownership team at Parlor (4170 Manchester Avenue, 314-833-4999). (Baltzell also owns Tower Classic Tattoos in the neighborhood).

Baltzell, who was first inspired to open Takashima Records after an extended trip to Japan during which he visited listening bars, says vinyl records and appreciating music is at the heart of the concept.

"What we found when we were in Tokyo were these places where within moments a record would be argued about — who is the artist, is it sampled — and that was really cool," Baltzell says. "But until it's put in front of you in this way, you just hear background music at a place. We'll have bios printed out every night [at Takashima] of the person spinning inside the menu; we want that to be a conversation piece as much as the cocktails or the vibe or the ambiance of the space."

Also focused on serving craft cocktails as well as extensive Japanese sake and shōchū selections, Takashima's bar program will be led by Tai Nalewajkó, who has worked as bar manager at the Blue Ocean in University City for the past two years. Nalewajkó is one of a hundred certified shōchū advisers in the U.S. through the Sake School of America and is also certified with the Sake Services Institute International.

Beverage and service manager Nalewajkó says customers can expect a large sake menu, a rotating cocktail list featuring ten to twelve drinks, beer, wine and a few N/A cocktails as well. During R&D for the cocktail program, Nalewajkó says he drew inspiration from food and other ingredients typically not seen on drink lists around town.

"I have some [cocktails] with tequila; I have a few with whiskey," Nalewajkó says. "It's a very American, modern cocktail menu but I'm bringing in ingredients that people don't necessarily know about and introducing them in a way that they'd know. I'm messing about with a lot of food right now; I'm using a yuzu kosho, which is a citrusy sauce you'd traditionally put on fish, in a tiki-style cocktail with tequila, an amaro and a few other things. It kind of tastes like spicy, savory Mexican candy but in a cocktail. I've been really into getting into the kitchen and making cocktails."


Nalewajkó adds that he's working with a few importers to bring in products that aren't currently available in Missouri — "stuff you only really see on the coasts," Nalewajko adds.

"Drinking is a huge part of Asian culture, especially in Japan," Nalewajkó says. "A lot of the food is familiar, but bringing those flavors [in drinks] and that tradition over here is foreign to [Americans]. Everything I've been doing over the past couple of years has pushed me this way, so us linking up and doing this together is kind of serendipity."

As previously reported by the Riverfront Times, Takashima will serve food, too, including late-night eats, but the menu has changed since plans were first announced. For Takashima's food program, the business partners are now collaborating with chef Chris Krzysik of Indo (and formerly Louie, Central Table Food Hall and Blood & Sand), as well as consulting chef Steven Pursley of Ramen x Rui.

Krzysik lived in Japan briefly in his youth and the flavors he experienced there never left him. He recalls paging through Japanese cookbooks in high school, experimenting with making miso soup at home and dreaming of bringing Japanese pub-style fare to St. Louis in recent years.

Krzysik first met Baltzell in 2012 through Baltzell's tattoo shop, Tower Classic Tattoos. The two struck up a friendship — Baltzell ended up tattooing both of Krzysik's sleeves — and given Krzysik's interest in Japanese cuisine, their partnership at Takashima seemed like a natural fit.

"For me, the way I want to approach the menu is understanding that, as opposed to a normal restaurant where the food really is the main focus, this is actually the opposite format," Krzysik says. "People are coming to [Takashima] to hear the rare grooves that we're spinning, to get the feel of the high-fidelity speakers, the beautiful ambiance and the cocktails. So to me, the food is just that cherry on top; it keeps you around for the next record. It's shareable plates with a very casual vibe."

Just because the menu is small doesn't mean the dishes won't offer something new and exciting, though. Krzysik says he wants to serve approachable and simple Japanese bar eats that pack a lot of flavor.

"The focus of the food is simple and elegant everyday Japanese food," Krzysik says. "There's definitely been leaps and bounds in recent years with Japanese food — people realize that it isn't always expensive and it's not just sushi and ramen."

Menu items will range from onigiri — rice balls stuffed with various fillings and wrapped in nori (edible seaweed) — in flavors such as umeboshi (preserved plums), tuna mayo and kombu (edible kelp) — and oden, a thin, broth-like soup packed with vegetables such as braised daikon and potatoes and protein such as fish cakes and boiled eggs. Krzysik says the menu will change with the seasons.

"I'm doing a lot of bar and home-style classics such as onigiri, which is the stuffed rice that you usually see for a picnic or maybe what mom makes at home," Krzysik says. "I definitely want to do other classic Japanese-style bar foods such as agedashi tofu, a deep-fried tofu with a very concentrated sauce called tsuyu over it with grated radish, bonito flakes and scallions — really simple dishes with a lot of good flavor."

But as Krzysik notes, food and drink are only one component of Takashima. Manager and owner Matt Leach echoes Krzysik in that the bar is equally a vinyl listening room, an element of the concept that has been given just as much attention. For Leach, who has worked at Parlor for several years and previously DJed around town, Takashima combines his passions for hospitality and music.

"Music is my language; I just really connect with it," Leach says. "I think what we'll be focusing on is trying to provide a level of service that is not really seen in this neighborhood yet, per se. Attention to detail and educating people about everything in the space, whether it's the records, wine, cocktails, beer — anything and everything. We want to create something very unique and inviting." 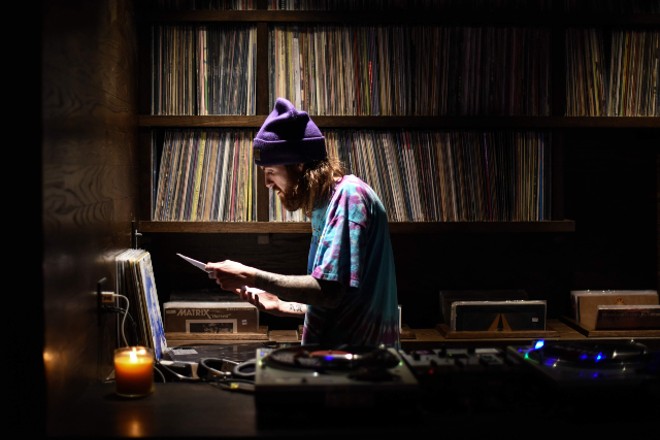 Vinyl is currently displayed on high shelves above the bar while a DJ booth connects the bar and seating along one wall. Paul Fullerton will be heading up the vinyl selection at Takashima; as music director and owner, Fullerton says that his goal is to showcase amazing local and national DJ talent while giving people the chance to share records that they love.

"We have an extensive vinyl library that's all cataloged by artist, label, album, year and the country it's from," Fullerton says. "We've been having a lot of fun cataloging that data so we can have a searchable database for DJs who are coming in and they can pull stuff ahead of time. We really want to be a place that the vinyl community can come and all enjoy stuff together. Record heads are either at their house or at record stores, but there's not much crossover, so having a place where people can come, hear a record they love or maybe one they've never heard we think is really important."

Baltzell says that he and the Takashima crew have cultivated relationships with record-store owners around town and that they hope to partner with them on events throughout the year, including hosting quarterly vinyl pop-up markets outside the bar.

"We want to build a platform for that community as well as for people who just want to come in, have a drink and listen to good music," Baltzell says.

"I think the tangible aspect of having a record and being able to learn about it and it being a physical thing as opposed to MP3s, I think we're really trying to share that with all of our guests," Fullerton adds. "We want to welcome people in, show them what's playing, show them the liner notes — we all really love records and I think our role is really getting the customer to feel that."

To complement the bar and listening room, Baltzell has also launched Takashima Records as a label. Headed up by Fullerton and Dan Hayden, record label CEO, the label plans to repress classic St. Louis R&B, soul, jazz and more.

Walking into the space, guests are first greeted at the hostess stand in a separate dining space. Baltzell says that these few tables will act as spillover seating for Takashima. "Captivating those people up front is really important for us," Baltzell says. "We want this to be almost like a micro-bar, so while you're waiting for a seat on a Friday night you can get a cocktail or two moving before you go back."

As you move through the bar, you'll see steps separating two stories: The ground floor dining room and bar area and the second-story lounge and private event space. The DJ booth bridges the ground-floor seating area and bar, with six booths forged around shipping containers flanking the dining side and the large bar and vinyl shelves opposite them. 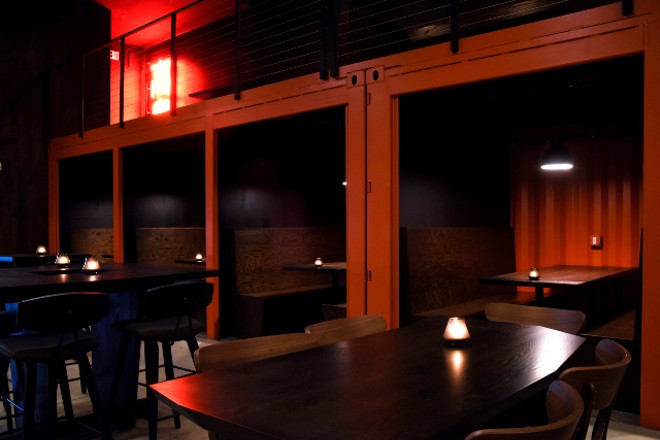 Baltzell worked with V Three Studios on the architecture for Takashima and Kadean Construction for the build-out.

"We got to do some virtual tours before we started building and it really helped," Baltzell says. "You know, with my experience building spaces, I've never got to do new construction, it's always been these old buildings, so it was really fun to work on something that was wide open."

Takashima will also have some food and drink for the residents of the Chroma building and different tastings with them as well. "We're going to offer maybe monthly educational classes, whether it be wine, whiskey, spirits or whatever, just so people can dive a little deeper if they want to," Leach says.

As the Takashima team gears up for its official debut next week, Baltzell says he's excited to open the doors and offer a different kind of concept in the Grove. Ten years after opening Tower Classic Tattoos, he's thrilled to see how the neighborhood has evolved and grown — including this next chapter with Takashima.

"It's wild," Baltzell says. "It's that gut feeling we had when we started Tower [Classic]; [the space] was all boarded up, but we knew this neighborhood had something to it."

Takashima is hosting soft openings tomorrow, Friday and Saturday, but all seatings are currently sold out. To learn more about the bar and listening room, visit its official website. 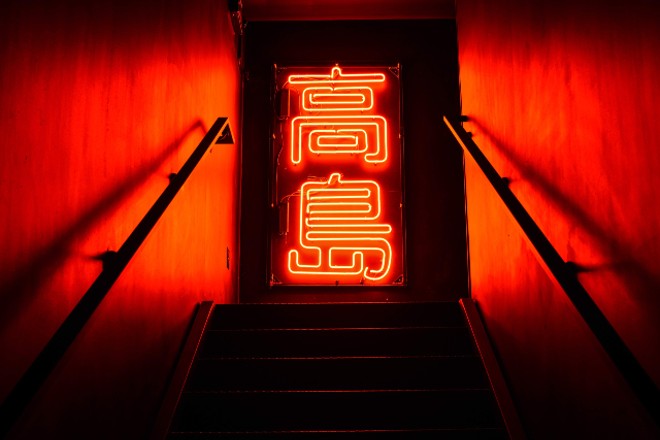 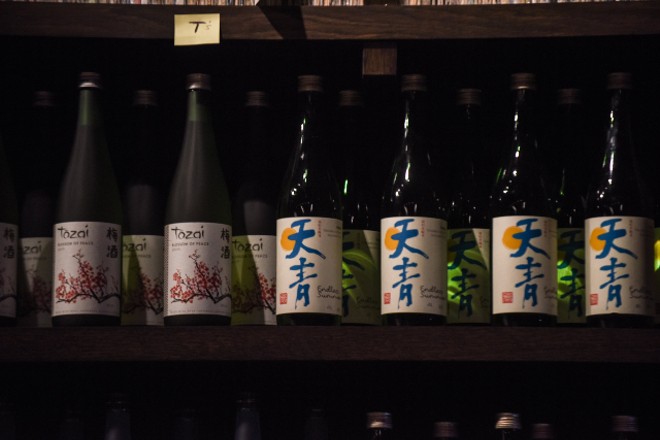 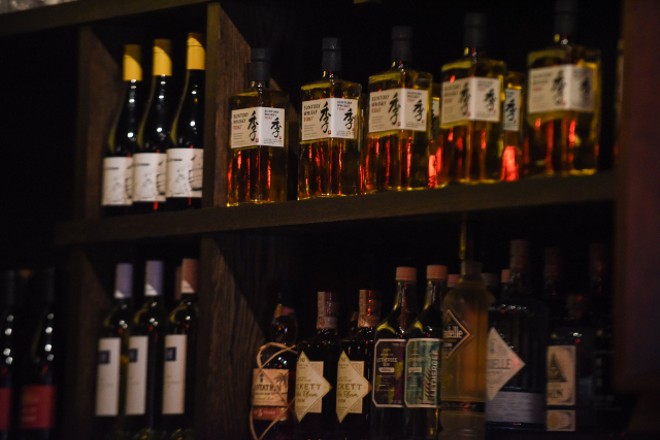 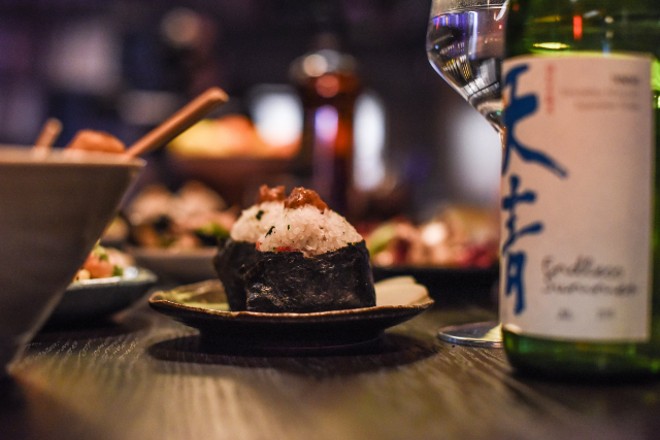 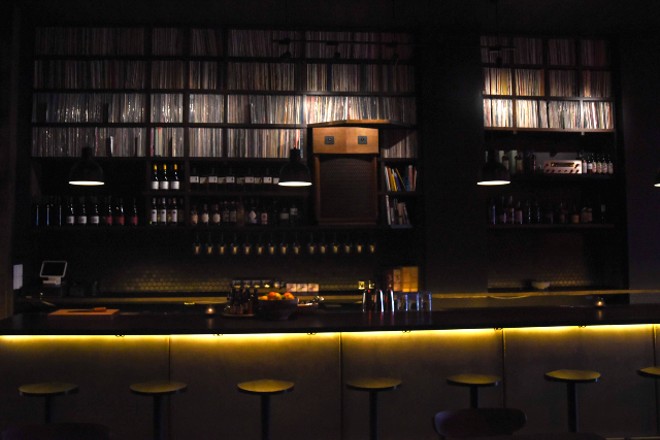