Everybody has been crying all over the internet all weekend about both of Green Day’s performances on Saturday for the NHL All-Star Game. And most of those people are just haters who don’t know how to have fun.

When it was announced that Green Day, Official Band of the NHL, was performing outside the Enterprise Center for free in addition to playing the televised event inside, St. Louis fans couldn’t believe their luck.

Green Day is a legendary punk band for older fans and a hugely impressive entity to people who care about things like Grammy awards and success on Broadway. In addition to decades of successful albums and tours, a musical based on the band’s 2004 album, American Idiot, has been a smash success and has brought the band’s music to a whole new worldwide audience.

At this point, Green Day is basically the Rolling Stones of punk: If they show up in your town, you’d be smart to attend so you can see how it all should be done. Professionals are professionals for a reason.

With this in mind, many longtime fans braved the cold and throngs of St. Louis hockey hoosiers (we call them “Bloosiers” on the south side) to catch a glimpse of these revolutionary pros. We all wondered how it was going to go down and if the crowd would mix well. Hockey is the official sport of punks, after all, so we had high hopes.

The event had been advertised as a “performance,” not as a full concert. The band was also playing inside (on ice) later during the televised All-Star Game, so the performance on stage outside was mostly just to provide the TV cameras with “rocking” footage of the high-energy band.

One block at 14th and Market was closed off, and fans had to enter a couple of hours early to get through security and claim standing spots to wait for the band. The crowd was very cold outside in the January air, but it was a nice mix of young and old, punks and sportos.

Just before the band came out, ruddy ol’ Brett Hull wandered down the front steps of the Stifel Theatre to greet and film his many fans. We maybe would’ve rather seen Jon Hamm, but this celebrity sighting perked us all up a bit and shook us out of our frozen stiffness. 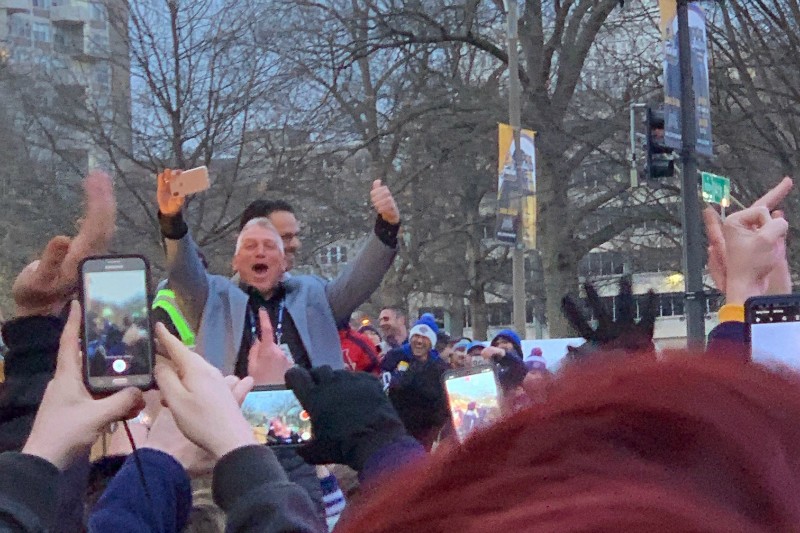 Then Green Day took the stage and blasted through three songs (“Know Your Enemy,” “Bang Bang,” and “Fire, Ready, Aim”) for the thrilled crowd before slipping off of the stage and back into the front door of the Stifel. As a goodbye and an apology, singer Billie Joe Armstrong slid up to the microphone and said “We’re Green Day! We’ll see you in the summer time, all right?”

Confused fans started chanting for the band to return and they thought it worked for a minute when Green day came back to the stage a few minutes later and again played “Fire, Ready, Aim” (which is so damn catchy that it should’ve been a Hives song) for the cameras with Armstrong explaining on mic that the NHL said that the crowd wasn’t “going crazy enough” the first time around. Fans down front were happy to oblige for this encore, bouncing up and down and clapping to the beat.

Before they began that, though, the band took a minute to give the true fans a few sing-along lines of “J.A.R.” and “She.” Respect.

Without the repeat song, the performance of the three songs clocked in at just under ten minutes and the whole thing was over in less than 30 minutes in total. Many cheers turned to boos, but really mostly only in the back of the crowd. The front of the crowd was packed with fans who stood in line outside for hours and were happy to catch the band for free, if just for a while.

But you know haters gonna hate, so tons of hockey whiners took to Twitter to cry about the length of the performance that they didn’t pay one penny to see and then everybody freaked out even more on Green Day online later when they, uh, liberally sprinkled their televised performance with curse words.

Judging by what the band had to say about it on social media, however, they were just having fun with the whole thing. See Green Day’s posts below, followed by other reactions and posts from all of the babies who need their blankies.

Hey, Green Day, don’t think that we’re a city of whiners. Add us to your Hella Mega summer tour with Weezer and Fall Out Boy and we’ll show you how much we can bounce when it’s not 30 degrees outside. You can bring your unicorn. It will be fun. Call us.

Bet our unicorn would dominate the Mascot Game 🦄😈 #NHLAllStar pic.twitter.com/93lpiuFjOD

Anyone know why we’re trending? We’ve been busy having a blast w the @NHL in St. Louis all night.

NHL: we told you not to curse!! WHY would you do that in front of children???

So I see now that, clearly Green Day only meant for the “outside concert “ as a promo thing. However by St. Louis and the NHL it was advertised as a free concert to get a shit ton of people to come. Still shitty and I wish Green Day would apologize for the miscommunication

the nhl: THIS IS COMPLETELY UNACCEPTABLE AND WILL NOT BE TOLERATED WE HAVE STANDARDS HERE

I think St. Louis was just punk’d by @GreenDay . Brutal 👎

I came to st louis today to see the free green day concert. I waited for 3+ hours for them to come out and only play 3 songs. the crowd sucked and even booed them as they were playing. y'all pay for what you get, it's a free fuckin concert what do you expect???? a full show???

14th and Market St in St Louis just become the Boulevard of Broken Dreams and I am an American Idot for going.@GreenDay #disappointedgreendayfan

Perhaps you should have billed the Green Day outdoor concert as “Green Day will come over and play a couple of songs“ and not as a concert. Lots of people got there early, paid for the parking, it’s January in St. Louis yada yada @StLouisBlues @NHL

amazing? this is the entire concert caught on camera not to mention i stood in the cold for 3 hours and they were 30 mins late this was pathetic st. louis proving itself to be shit yet again

I feel like the only way @GreenDay could make up for that performance is actually put St. Louis on their tour.